Showing posts from 2019
Show all

With only one weekend for fun stuff and exploring while in Hawaii on a business trip, I knew that I had to make the most of my very limited time. There was no doubt that hiking would be a major part of those plans! I had intended on waking up around 4:30 am and heading to Koko Crater to kick the day off, but a week full of battling jet lag finally caught me and sleep won in the end.

Hike 1: Makapu'u Lighthouse Trail
Starting a little later than planned (6:30am) I headed off to a my first destination, Makapu'u Lighthouse Trail. The drive from Waikiki to the light house was beautiful, along the coast, with several scenic stop offs that I took full advantage of, putting me even further behind schedule but with some added in Hawaii experiences too!
This park opens at 7am (something I hadn't previously known)
Makapu'u Trail is completely paved the entire way up. I wore my hiking shoes but would have been very happy doing it in my Chacos. It's a pretty steep incline…
Post a Comment
Read more 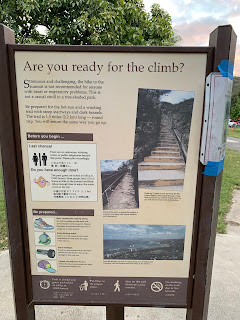 I'm hoping that this post helps people wanting info about the Diamond Head hike because when I was looking for info online (including climb time) I found very little that provided the information that I needed.

I was in Hawaii on a time crunch, there for 2 days for a training for work then flying out. I wanted to get in some of the beauty before leaving the island. When considering Koko Head and Diamond Head, Diamond Head won because of the close proximity to where I was staying (Waikiki) and the time crunch of needing to catch a flight that day.

I took a Lyft to Diamond Head, they stop you at the tunnel until the park opens. Some people park there (very limited spots) and tour buses drop people off there as well. There is a park ranger who lines people up to try to make sure it's a smooth process and flow getting people into the ticket booth. From the tunnel you go down a small hill and around the corner and the ticket booth will be in front of you (it's along the r…
Post a Comment
Read more
More posts