Showing posts from April, 2010
Show all

April 30, 2010
Dinner tonight (Friday April 30, 2010) was near perfection! Adina and I ventured out into our neighborhood, blue street, named because there are blue tiles on the road (creative I know!) and what we dined on was fantastic! Finally, after being in Japan for 2 weeks, we experienced the ever raved about sushi-go-round. The fish is fresh from the fish market that day, and there is a man making the sushi and putting it on color coded plates (each color represents a different price) and then onto the conveyor belt that shuffles the dishes around the people who are sitting around a bar. It doesn't get better than this I assure you! I unfortunately did not have my camera with my for this dinner experience, but don't worry, we will be testing out every sushi-go-round in walking distance! Oh and since it's Friday (crepe day...declared by Adina and I) we had a fantastic desert from the creperie (I think I made that word up) downstairs. You see a delicious looking chart with pictur
2 comments
Read more

I take my pig tongue with wine in a can

April 27, 2010
To start things off, everything is better in a can here in Japan! I have tasted many varieties of coffee in a can (hot and cold versions) and have been thoroughly impressed. Dunkin Donuts and Starbucks has nothing on this system! Adina and I discovered that the shopping mall/plaza/tower next to our hotel has a grocery and marketplace in the lower level. One of the stores (labeled Kaldi's Coffee) has a wide array of products, certainly not limited to coffee (in fact coffee is only a small portion of what they have). This is where we made a huge discovery...wine in a can! This is a fantastic little item that comes in a can about the size of a Red Bull can! There are several flavors, and all of the flavors come in regular or bubbly. I know you wine snobs out there are turning up your nose, but don't knock it until you try it, wine in a can is great! Tonight (4/27/10) for dinner Adina and I decided to go to the Korean Restaurant that has been recommended on several instances. L
3 comments
Read more

April 26, 2010
Today Adina (coworker) and I attended an orientation briefing (we will be doing this all week) and learned a lot of interesting things. Most importantly, that we (we being Americans) have a curfew. Monday through Friday we have can not be out at the bars near alcohol after 11:59 pm. On the weekends (Friday is iffy as to whether or not the MP's consider it a weekend day or not) we can be out at the bar around alcohol until 2 am. If you are caught there are some pretty hefty consequences, and even if you are not drinking. If you are sitting at a table with four people and there is one drink, all four will get charged with the offense. Warning taken, I will not be in that position! No tattoos. I found this interesting considering the high concentration of military personnel with ink, but hey, who am I to argue. I guess some time in the not too distant past there was a bit of an epidemic with hepatitis and tattoo parlor's here. No massage parlors. At first I was really bummed,
1 comment
Read more

Kamikura, Hase, and The Great Buddha

April 24, 2010
On 4/23/10 which is yesterday for me but could very well be today for you, we visited Kamikura, Hase, and The Great Buddha. My first real expedition in Japan and it was fantastic, mainly because it didn't rain! Kamikura was the first stop. You walk through the town and down the middle of the street is a walkway with beautiful flowers (the traffic is on each side of this). You follow this path to the main shrine. This place housed an ancient Gingko tree (now mainly just a stump) that was the site of a family murder that ended a dynasty in which this place was the capital city. While here we were able to see several weddings taking place (the final phase of the weddings, parts of the weddings are completely private and only the bride, groom, and the person performing the ceremony are present). There were little street vendors along the way to the shrine in Kamikura, most of them selling some kind of candy, and several selling candied fruit. I tried the candied grapes (it was nasty,
Post a Comment
Read more

April 22, 2010
I swore to myself that I would be adventurous with my eating while here in Japan. Well last night started that off with a bang and I can definitely tell you some things that I will not be eating ever again! The manager of our hotel wanted to take us all out to dinner (to his family's restaurant?), so we went to this great little establishment close to the hotel that was down and ally and literally almost covered by a banner with Kanji writing on it (you never would guess it was a restaurant/bar because we had to duck to get in, never mind see the place) We sit down at this huge table with people who he introduced to us ( Korean's who are his good friends, who live in the US, Seattle). He mentions something about Plum Sake, I don't remember ever agreeing to this beverage. Glasses are brought over, some identifiable, others less so. I can recognize a beer no problem, a small glass is put in front of me that looks like water with ice but when I sipped it it had a sweet fl
Post a Comment
Read more

These are a few of my favorite things...

Pictures will follow later because I have not been astute enough to capture these elements of awesomeness! So here we go, and please don't be jealous! Thus far my favorite things in Japan are: what I refer to as the "magical toilet seat", and the coffee in a can machines. These things are amazing and need to somehow come home with me! The magical toilet seat (first encountered at the Radisson near the airport, but then also later discovered to be in the airport bathrooms as well) is a device (kind of like a seat cover) that goes on the toilet. It has various buttons on the side with some pretty amazing options. Two of my personal favorites are the heated seat option and the faux flush option (I guess the sound creates the appropriate ambiance). The other options are a bit intimidating and definitely not standard on American toilets (bidet, shower, heated shower, etc). The coffee in a can machines are vending machines that have sports drinks, energy drinks, water (altho
7 comments
Read more

I made it! Wow, what a long flight! I just got to the hotel due to immigration, customs, and the bus transit to the hotel taking FOREVER! It is 5:02pm on 4/18/10 and I started my travels at 5am on 4/17/10! I didn't get much sleep on the plane so I imagine jet lag recovery might be tough! I did however get to see (finally) Avatar and The Blind Side (just to name a few)! Love you all and hope to catch up soon! I have already experienced some frustrations with the internet here, so bear with me :)
2 comments
Read more

With love from St Louis 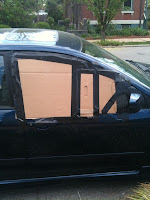 So I had a fantastic dinner with even more fantastic friends last night, only return to my goodbye present from the lovely city of St Louis... This is the temporarily repaired version of the mess that I received. Apparently someone decided that they needed/wanted something within my car. What they were probably looking for was a GPS (I never leave that in my car), what they walked away with was my phone charger and a cable that plays my iPod through the car's radio. Wonderful! So, added to my very long pre-departure to-do list now is to have my car window repaired and to somehow remove the very small shards of glass that are everywhere.
1 comment
Read more

April 15, 2010
Hello dear friends, family, stragglers, and whatever other label you may attach to yourselves... I decided that this was the best way to keep everyone informed/posted/and full of pictures of my journey in Japan, not knowing how effective the internet will be at my hotel, this seems like the best way to reach the masses! So, you're all traveling with me :) Oh yeah, we leave Saturday!
Post a Comment
Read more