March 29, 2018
This morning started off super fun by dying Easter eggs with my friends kiddos. They can't get that kind of thing in Nepal so I brought over all kinds of Easter goodies, including a couple of egg dying kits for them! I haven't dyed eggs in years and the kits were way fancier than anything we ever used as kids, but still super fun! 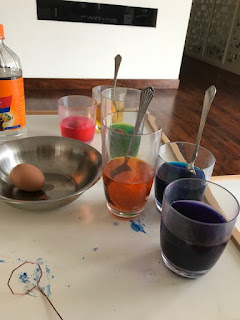 After the eggs it was off to lunch for traditional Nepalese food. I have been eating this style cuisine (or similar) for many years so I was excited to try it and see similarities and differences. The flavors were amazing and the spice level was great!
We started with some "bites" then had a set plate that had a nice sampling of many different dishes. One of the "bites" was described to me as "deer" it came out looking like maybe jerky, with a few fattier pieces? 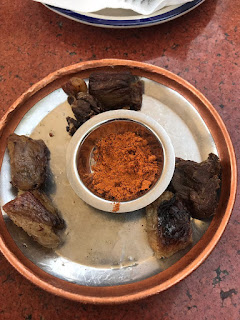 It was quickly discovered that my friends Nepali translation was perhaps not accurate, and that the animal wasn't in fact a deer. When I saw the picture of what it was that I ate I quickly realized that I ate something resembling a ram/big horn sheep (they called it "blue sheep"). It wasn't bad, probably not something that I would crave though either.

With a full belly (like Thanksgiving dinner on the verge of a nap full) it was off to Thamel. Thamel is described as being sort of the hippie part of KTM. You can buy all kind of traditional Nepalese souvenirs in this area. Some of the streets are only for pedestrians (which is nice because navigating roads with cars and motorbikes is super dangerous...walk with purpose...and still plan to get hit by something. Today I was hit by a scooter mirror while it was driving by). There are many shops selling excursions, outerwear (North Face seemed to be a popular brand, not sure if it's real or knock off), hand made crafts, and if you fancy it you can buy weed and hash there.
It's definitely a vibrant area!
After navigating the streets of Thamel and window shopping it was time to stop off at the Garden of Dreams for a cup of tea (I'm loving this afternoon tea!) The Garden of Dreams gets you off of the streets and out of the dust/pollution and out of the chaos/noise if you need a break. There is an entrance fee (as with all things, foreigners pay more than Nepalese people)

Adventure continues early in the AM with a flight out to Chitwan, I'm told domestic flights in Nepal are an adventure as you can always expect delays...of hours. And the airport has NOTHING, and the restroom in the airport is nasty (I'm told). I was specifically told to use the restroom on the plane before getting off so I didn't have to use the airport one. Here's to hoping there isn't an extended stay in the airport waiting for a flight to take off!

And as usual, here is the day...in video!