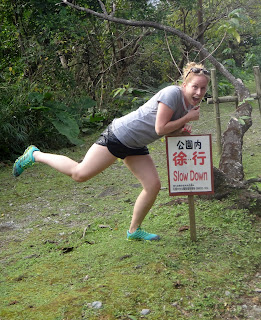 Today was an adventure of epic proportions! Fantastic weather, great company, and a hell of a hike. Things don't get much better! Let's start with the hike, I (and all parties involved) were slightly misled about the intensity of the hike. Leisurely stroll this was not. We started our hike from the parking lot, which we later realized was probably a mile from where we could have started, at an upper level parking area. From there there were several options, we just continued following signs in Kanji, hoping for the best! We eventually found the hiking path, and about a mile into it, there was an option to go "off roading" onto a much more rugged looking trail. Yes we selected this option and lucky me, I was the leader (aka: spider web destroyer and habu lookout person). Perhaps long pants would have been a good option, even a machete would have been nice in those conditions! Finally we reunited with a more traditional hiking trail until the summit. This involved thousands and thousands of semi-wet wooden steps of varying degrees and heights. The hike took about 2 hours each direction, and once we got to the top we realized that it was worth every single spider web and painful step!

I can't say enough about the view on top of Nago Mountain. It's breathtaking. 360 degree views of the island and the water.

Hiking up and down involves several choices of paths, all that seem to lead in the same direction, but offer very different terrain. We opted for a different way down (not through the banana spider infested non-hiking trail jungle that we came up the mountain on), this resulted in more slippery stairs and then walking through a rock ravine that at times had some rice bags in it (for stability?), the ravine kept getting deeper, developing rock walls around us, giving the illusion of an impending flood. Thankfully the water never came, and we made it safely through the slippery trek with no injuries to report (aside from sore muscles)


So glad that I had an opportunity to do this hike before leaving this beautiful island! It would be a shame to have missed this experience and certainly the view!