One of the (many) great things about living in Japan is your ability to hop a train and plane and in very little time be somewhere completely different.

My full time job (yes I have one despite what many of you may think!) was a complete shit show this week, so I was determined to just get away and enjoy myself, not letting their ridiculous bs get to me or impact my weekend (when they don't pay me thus very clearly have no right to cramp my style!)

More than the change of scenery, I just needed to be surrounded by some of my people. People I can be myself around. People who don't judge if I want to wear Jammie's and lay around doing absolutely nothing because they will do it with me. These are some great people I tell you!

I may or may not have questioned the greatness of one said friend when she made me go for a 5 mile run in broad daylight (hot as hell)...just kidding I still love her, but I do not do daylight runs. That sun kills me, zero dark thirty all the way! 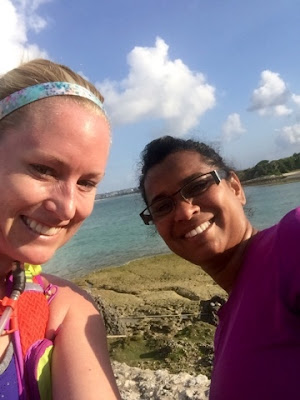 Here is proof that we finished and that she did not in fact kill me as I claim she did.

We went and got our nails all Japanesey as one should always do while in Okinawa (or Tokyo, sadly Sasebo sucks for this) 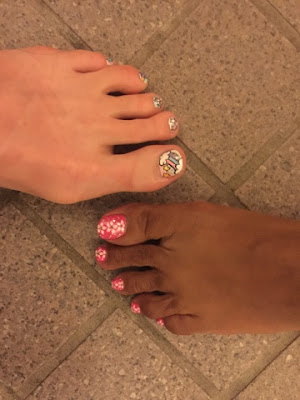 The adventure really kicked up when I was making my way back to Sasebo via the JR from Fukuoka. I thought I would have the pair of seats to myself when seconds before the train was to pull out, two drunk girls got on and lucky me one day with me. They appeared to be coming from a wedding. Lots of day drinking to be done at those events. I thought we were fine when she went to sleep, wrong-o. A few short minutes later she was frantically rifling through her bag, which I later would realize was to find a plastic bag, and she proceeded to entropy her stomach contents. While still sitting right the freak next to me (thankyouverymuch). I'm not sure the etiquette or cultural norm on train puking, but I do know that had I been sick, I would have beelined for the restroom or in between cars where I wouldn't be puking 3 cm from someones leg. But that's just me, and I guess I like a bit more personal space.

After she puked what appeared to be all liquid (I assume alcohol), she then fell j to a deep sleep, Goldilocks style. Wouldn't have been bad if she had stayed in her seat and kept her body parts to herself. At one point her elbow erratically slipped odd of the mutual armrest and I took an elbow to the ovary. For the remainder of the train ride her head did the bob and weave bouncing from my shoulder to almost hitting the wall in front. Here is my drunk train puker arm rest stealer no personal space having lady parts molesting...seat mate. You can see how thrilled I was with her! 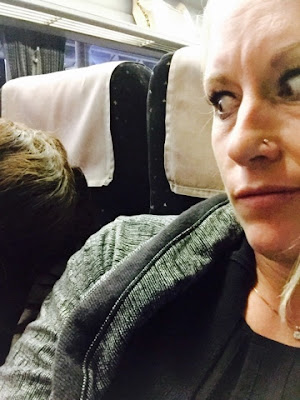 After a long train ride, I was happy to be "home" I hate to even use that word for the crappy hotel I currently reside in...
Next adventure already planned...Okinawa for the long weekend in October, now that's home!!
2015 Asia explore flyin solo frequent flyer Japan Japan rail JR Miss Adventures see the world single girl on the go Travel