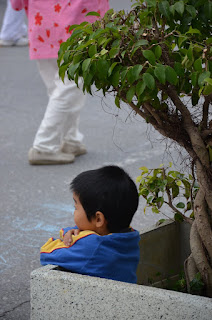 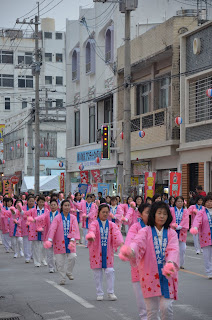 Festive it was, but whatever it was that I expected, this surely was not it. There was no cherry blossom king and queen, no cherry blossom princess even. The parade my friends consisted of lots and lots of older women with a pink shirt on with a cherry blossom attached to each hand doing Hawaiian-like dances down the street. That. Is. It. No singing, no dancing, no drumming, and certainly no throwing of free candy.

Prior to the parade though I climbed over 400 steps to the site where a castle used to be. You would think that after climbing that many steps you yourself would get a little parade of sorts...
As for the castle site, you would also think that something that had such significance would have some sort of memorial. There was an opening/clearing. I don't see how a castle could have possibly fit up there unless it was something from the Barbie or Lego era.
As for the Cherry Blossom part of this event, I was deceived. So the "Cherry Blossom Festival" is actually just the even that kicks of the start of cherry blossom season. So really not that many blossoms have bloomed by this time, they are just started to show signs of cherry blossom-ness. What cherry blossoms did exist I tried to take pictures of.
On the way up the 400+ stairs (at about the half way point where you can call it quits if you want to) I was rendered speechless by the following: 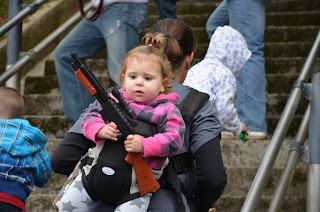 Not just the sight but the fact that the whole family was wielding guns and pointing them at one another. This little baby even had her rifle firmly planted in my thigh at one point.
All in all it was an interesting day. Given what I know now about the Nago Cherry Blossom Festival I probably wouldn't go back, but, there was some great people watching, Kit Kat finding, and those 400+ stairs were a fantastic workout!
Here is my full photo ALBUM since the slideshow feature is currently failing to work!
Food Okinawa 2011