So today turned into an utter day of domestication. I'm not sure how it happened since I'm probably the least domestic person in existence. But, it at least gives me hope that I'm not a complete and utter failure in the kitchen (or in my case very small kitchenette with zero cooking utensils!)

Here's what was on today's menu (I cook/bake on Sundays for the rest of the week since I have NO time during the week to do these things!):
- Paleo Mocha Muffins
- Paleo Spaghetti (squash) and sausage
- Homemade sweet potato chips

I have been craving a nice hearty dish so the spaghetti squash and sausage seemed like a perfect fit. I should note that I try not to use spaghetti squash often because in the Paleo world it's kind of a naughty food, found on the high-glycemic end of the spectrum. So, it's more of a treat than a staple! So, as promised, here are the recipes for today's culinary masterpieces! I should preface this by saying all of these were made in my hotel room in my tiny kitchenette, mainly in my toaster oven, so it will likely be less of a chore for you :)

Using a mandolin (way easier than a knife) slice thin slices of as many as you want to make.

Lay parchment paper on your pan

Toss sweet potato slices in some coconut oil and sea salt (not a lot of oil, just enough to get on all of them (an alternative to tossing them you could baste it on there but I didn't have a basting brush or the intentions of buying one!) Don't pile them on top of each other on the pan (this is where I failed the first time)

Bake 8-10 minutes and flip them over, baking another 5 or some minutes until they are your desired crispiness 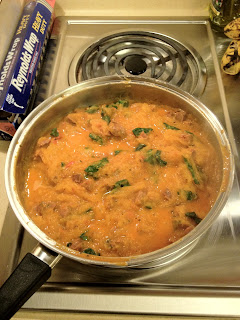 Cut the spaghetti squash in half the long way and scoop out the guts like you do a pumpkin. Place it face down on a pan

Bake it for 20-25 minutes (until it's slightly mushy to the touch). Take it out and let it cool

Finally with a fork scoop out the spaghetti squash into the skillet, stir, and consume. Delicious!

Melt chocolate chips, stovetop or microwave, I microwaved (do so in small increments so you don't burn them)

Add eggs and melted chocolate chips to dry ingredients. Use some muscle power because this stuff gets dense! Stir in honey, coconut milk, and coconut oil. Continue stirring until mixed.

Add to your muffin pan (if not using liners then grease the muffin pan w/some coconut oil or coconut spray), I prefer liners because they're fun :)