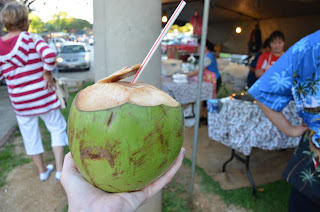 Ventured off to Chamorro Village last night. Every Wednesday the place is packed with local vendors selling everything from shell lei's to local cuisine. This is the first Wednesday that I've gone...and there was no shortage of entertainment!

There was one thing that I was really interested in prior to arriving, and that was the fresh coconut...as you can see, I was successful! It was delicious!

In addition to this coconut I also succeeded at devouring some amazing street food. I passed up the banana lumpia (which I assure you is the best thing EVER to eat) because of the junk that I had previously consumed (including a chocolate covered wild banana on a stick. Yum!

Throughout the evening there were some interesting things/encounters. A man with his pet monitor lizard (3 feet long) who had the thing crawling all over him. A water buffalo with a saddle on it, they were selling "rides". I passed on the ride but did pet the water buffalo. 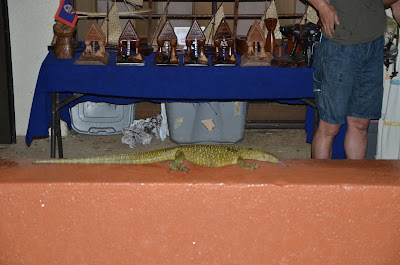 It poured for most of the evening, which in the grand scheme of things was actually a refreshing break from the oppressive heat/humidity.

All in all a grand evening enjoying some local cuisine/entertainment!