April 06, 2018
Up pretty early, wanting to get every ounce of life out of the day seeing as it's my last full day here in Nepal. I don't even know how it happened so fast, but it did and I fully intend to make the most of it! Tomorrow (and part of Sunday) will be filled with traveling back to Japan and before I know it I'll be hit with the reality of the work week schedule.

Something that has always been important to me when traveling is making sure to positively contribute or support the local people. When I traveled in Thailand and Cambodia a few years ago I was fortunate enough to find Backstreet Academy. It's a program (that is in many countries) that provides meaningful travel experiences by connecting you with local trades and experiences, and helping to support and boost local economies in the process. Impact travel. I've blogged about the importance of human connections, and did an entire podcast episode over on my podcast A Glittery Affair about it as well, the Backstreet Academy is exactly that. Meaningful travel experiences that give you human connections you'll never forget!
Backstreet Academy has experiences in the following locations:


If you're traveling to one of those places I highly recommend looking into one of the experiences and checking it out, plus if you do one of the crafting ones, you'll go home with a unique one of a kind souvenir that you made with the help of a local person. So neat! Money can't buy that in a store!
You can browse the options and book experiences HERE

Resha made a delicious breakfast for us, complete with some tea (not Masala but she made it like Masala so I know how to do it when I'm home), Yak cheese (my new favorite), eggs, toast, and fresh papaya. Oye, I'm going to miss these yummy things.

I've become obsessed with the Nepali spice containers, it's like a large stainless container with several smaller round stainless containers inside to hold the individual spices in it, then a large lid to cover it all, it's so neat and organized and visually appealing! I'm on the hunt now! I believe it's called a Masala Dabba but I could be wrong.

After easing into the morning, it was off for a serious adventure! You don't think I mentioned Backstreet Academy for nothing did you?! So Backstreet Academy found me via my podcast Instagram (they didn't even know that I had done Backstreet events before!!) They saw a picture that I posted in Nepal and asked if I'd be interested in doing an event in Kathmandu, no brainer, of course. I picked the one that most interested me (although they all interested me, this one MOST interested me for so many reasons). Khukuri making. The khukuri is the knife used by the Gurkha's (soldiers). This is the only weapon they used to fight. Granted the one they used is a little bigger than what I will be making today, but still I'm so excited to be experiencing such a unique piece of Nepali culture and history. The person that Resha and I are taking the class from is a man who has been making Khukuri's for a very long time and comes from a long lineage of Khukuri makers.

We were picked up by the coordinator (someone to translate because Indra doesn't speak English) Resha speaks Nepali and could have translated but when most people sign up for Backstreet Academy events they don't speak Nepali or have someone with them who does so in this case they provide a coordinator to go with you. When I was in Cambodia I didn't have this, but there also wasn't a language barrier.  The coordinator also helps you to physically get to Indra's place (he works out of his home) which we never would have found on our own!

In Indra's shop working is also his brother-in-law, he speaks some English and also works on khukuris, he seemed to be doing a lot of the detail work (the design on the blades, which was insanely talented.)

When we started I had no idea the beautiful work of art that I would leave with. NONE! I mean, I started with a rusty old piece of metal. How could this possibly turn into a beautiful knife that I could use in the kitchen? One that would last a lifetime? Indra picked up a khukuri that he had that his grandfather had made (it was 70 years old) and indicated that only the wooden handle had started to go so he replaced that, the blade was still sharp! Indra promised us a 50 year guarantee on our khukuris made today.

The process start to finish (with a break in the middle) took a solid 5 hours...including the ride there which was probably at least 30 minutes). There were many steps, as is expected. When we arrived he already had our bone handles and bone sheaths made, thankfully, as I'm pretty sure that's out of my league and skill set! The bone handles and sheaths are made from buffalo bone.

There was a lot of heating, then pounding, this happened several times. I used the little mallet and when my efforts just weren't cutting it he called in his brother-in-law (and the big sledge hammer...good call not having me use that, he would be missing body parts) and things moved along faster! Soon the khukuri started to take shape, then it was on to the grinding machine, this was not my favorite, I did try it, but quickly decided that I didn't want to participate in that anymore when it started to send sparks into my hair, my clothes, my skin, and I was feeling and smelling burning, none of which was pleasant! I let Indra finish this stage for me! There were more buffing and grinding phases, Indra made my knife so sharp and strong (because I indicated that I wanted to use it for the kitchen). Actually when he asked I said I wanted to use it for fighting. But I was being a smart ass. He laughed when the coordinator translated it for him. The process of the handle install was really kind of fascinating and at first I had no clue how that was going to happen. I missed it the first time around but caught it again when he did Resha's khukuri, check it out:

After things were in place there was more buffing, to make sure that the bone, and the brass that was put onto the handle and sheath were also smooth. Then he even applied polish to the blade and buffed again. I know I forgot steps in the retelling but you get the point, the craftsmanship and attention to detail is out of this world. He put some cooking oil onto the blade and informed us that this is how you clean it. After using it you get a towel that is damp and wipe the blade off (to get the food bits off) then you use kitchen oil to wipe the blade. You don't "wash" it like standard things in the kitchen. That's how you preserve the longevity of this khukuri.

Here is the before/after pic. I placed my finished product onto a piece of metal that is the exact same thing that mine started as. Hard to believe isn't it?! 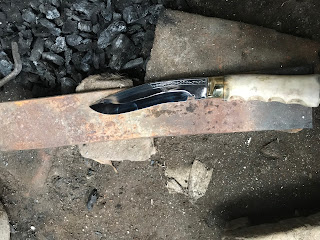 Indra proved the sharpness of the blade when he finished on mine by taking it to my arm and "cutting"/shaving the hairs off of my arm. After I agreed to this I realized that this was potentially a really bad idea and that it was putting a lot of trust into someone's hands with a blade that sharp at my arm, but, I trusted the stranger, more than I trust some people I know, what can I say?! haha! So I agreed without hesitation!

Today was a beyond amazing experience! I can't say enough about Indra, his skill, the ability to step into his world, his home, his workshop, to be able to experience this piece of Nepali history from someone with such a long lineage of it, priceless. These kind of meaningful travel experiences are what life is about, these kinds of human connections absolutely fill my soul in unimaginable ways!
I can't recommend trying a Backstreet Academy event enough when you travel! 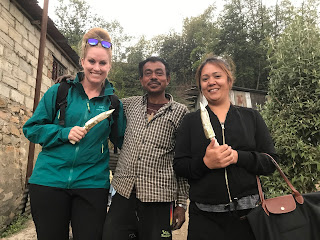