April 04, 2018
Because it wasn't an early flight it was a slower start, no rush to get up, pack and head out. Unfortunately there wasn't enough rain to burn off the smog and reveal the Himalayas for that picturesque view that Rupakot offers with the 3 lakes. You will just have to google that to see what others have been fortunate to see. Rupakot is stunning, and even with smog you can see the 3 lakes, but when the Himalayas are visible you can imagine how breathtaking that view is. Next time. Because yes there will be a return visit to Nepal, I have no doubt.

Breakfast. This was the first breakfast without porridge, not by choice, but because they didn't offer it. A taste of what life without porridge will be like I suppose. I wasn't quite ready to get used to that. 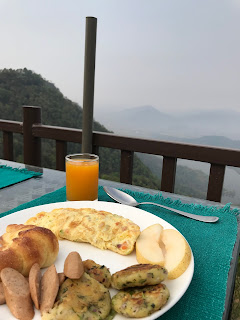 Then it was off on the crazy dirt road to venture to the airport. On the way down we saw monkeys on the side of the road. Super cool. The way down seemed a little easier than the way up, perhaps because we could use air conditioning.


Traffic caused a bit of a delay but we still arrived to the airport on time and were told that the flight would be taking off on time as well. Things were looking positive. When we went through security there was another Buddha Air flight departing to KTM and we asked if it was full (to see if we could get on that one instead) it appeared full, until at the last minute they seemed to be looking for a passenger/passengers. They grabbed a guy who was sitting there (traveling alone), apparently they just had one seat available. Lucky him. He wouldn't know how lucky he truly was!

As it turns out we were about to be in for quite an adventure at the Pokhara airport. Approximately an hour into waiting it started to storm, badly, lots of thunder and lots of rain. Our airport closed to air traffic (which we wouldn't know until later). Our flight actually started doing other routes so when our airport did open up again they didn't even have a plane for us!. Approximately 2 hours into the storming the airport completely lost power, for about 30-40 minutes. So we sat there in the dark.


There isn't much for food inside the security check area, a shop with some snacks like chips and cookies but that's it. Since we didn't know if things would clear up and a plane show up, we couldn't just leave to get food. We were starving at this point. Finally about 5 hours later we finally had a plane and were able to leave Pokhara for KTM. What a seriously long and exhausting day of doing nothing! 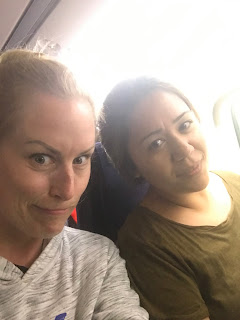 Not much to show in the Quik video today as we did a LOT of sitting at the airport! The rest is driving down the mountain to get to the Pokhara airport! None the less, I made one anyways! Tomorrow is a bit of a down day before Friday's fun activity of making Khukuri's, my final day in Nepal before leaving Saturday. I can't believe how quickly it's gone by.