April 03, 2018
A bit of a slower start today, it was appreciated since it was the first one since getting to Nepal, first day without jam packed activities. Only real thing on the schedule was the 11:30 pick up to head to Rupakot (approximately an hour drive on a bumpy dirt road, up a mountain...oh what an adventure!)

The driver showed up about an hour earlier than planned so we headed to Rupakot earlier than planned, which was fine. The ride there was definitely an adventure. The normal; cows in the road, tractors driving down the road, having to stop and wait for various things to cross (humans, machinery, animals, you get the point). Once we hit the dirt ascending part I knew we were in for it. Oh I forgot to mention, when we started this point the driver also had to kill the AC (and it was sweltering) because he couldn't run the AC while also climbing the mountain. The road was, uhhh, thrilling. And questionably safe. For even one car, but turn that into a two way road and you have a true adventure! Literally end of the earth if you look over the side and cars (including ours) were flying up/down this mountain. Which also caused sandstorms so bad that you couldn't see ahead of you! We drove up this mountain for what felt like 30 minutes before reaching the top (and a truly breathtaking view of the 3 lakes). Granted there is absolutely NOTHING to do, you're at the top of a mountain with nothing but the hotel/resort up there, but the view is spectacular. Hoping for some rain to burn off the smog/haze and to bring out the mountain view for some pictures!

The haze just seemed to intensity so there was little hope of seeing the mountains today! I'm hoping that the the rain happens and gives a nice appearance for the morning before we leave to fly back to KTM!

Went down to the restaurant for an afternoon tea (and dessert, go ahead and judge away, sure I'm coming home probably 10 pounds heavier, but they've been delicious and I've enjoyed every single bite). The Nepali chai tea that I've been having is delicious and I'm on a mission to find some to bring home before I leave. The dessert, described as "traditional Indian dessert" was two donut hole looking balls in some syrup. They were tasty, the syrup was very sweet. No sooner than finishing the dessert a freaking wind storm (and the beginnings of the rain) settled in blowing dust and dirt up the mountain. We quickly had to take cover inside the restaurant rather than at the outside table. 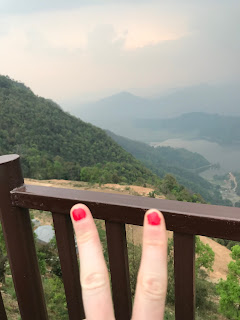 Laziness (and perhaps a little rain) won and room service happened for dinner. I mean, did you see the picture of the stairs I had to climb up/down to access the restaurant for food? You'd reconsider too! Elevation between the restaurant and my room nearly requires an oxygen tank and proper trekking attire (ok maybe not but it felt like it!)