This has been the least structured day of the trip thus far. I was fretting about it at first, wondering what the hell I would do, wanting to capitalize on every second that I had here, feeling my Thailand vacation slipping through my fingers all too quickly. But, it's ok. It's ok to just walk around and see things at your leisure.

It enabled me to figure out some transportation to the night market (in Krabi Town...other side of Krabi) tonight and wouldn't you know there was a stand for mango shakes right next door, a fresh mango shake for breakfast, yum!

I went to see about taking a long tail boat to some of the neighboring islands but I would have had to sit and wait until they had at least 6 people. I had zero interest in sitting there to wait and possible not be able to go, wasting all of that time. 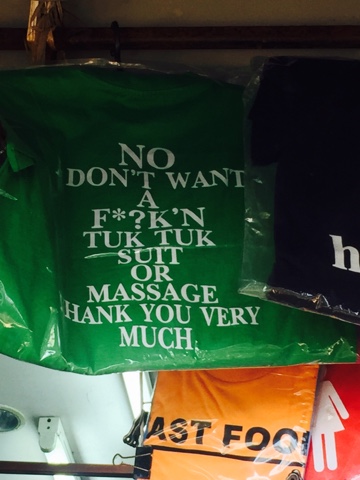 Walking along the beach is very beautiful (not as beautiful as Phi Phi...I wouldn't swim in Krabi the water isn't that clean and not crystal blue like Phi Phi) 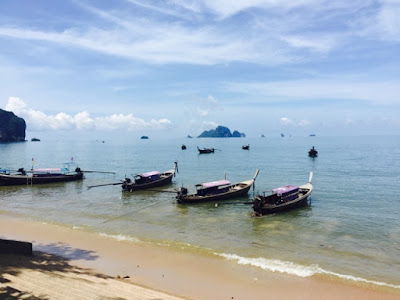 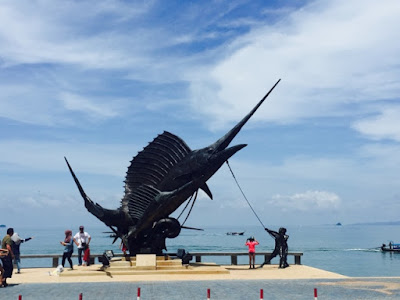 The temp was beyond oppressive today. My skin was dripping from the humidity. At one point I got so hot that I just had to take a minute and cool off so I walked back to my hotel (also a much cleaner bathroom option than the 5 baht public toilets along the beach) and sat in the AC for a little bit. In very aware of the sunburn I have from yesterday so I'm trying to make sure that I'm not in the sun all day (despite having sunscreen on per the usual).

I met a sweet Thai lady as u was buying a cute dress (she was selling it to me) and I asked her about the food carts and things getting busier in this area today. She told me that it wouldn't today, it's a Muslim holiday and this area is predominately Muslim. She said its a Muslim country but I assume she was referring to Krabi as Thailand is 80 or 90 percent Buddhist. It's interesting because as I was traveling to the islands from Phuket there was definitely a strong Muslim presence.

So I was walking down the street updating the blog, and what happens in front of me... 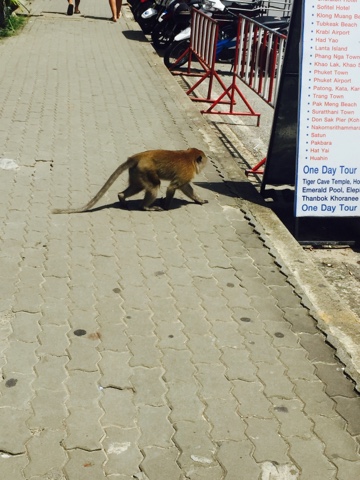 A wild monkey (something was wrong with his front hand) at least he wasn't being used by a local for some kind of song and dance. He was oblivious to people. Walked into the middle of the road (and thankfully out) before sitting down here... 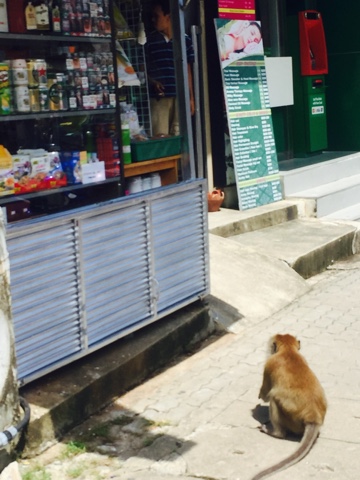 He's at the beer stand, making a touch choice between Chang beer or some other libation. Just kidding. He went on his merry way. Cool to see I just hope he gets back to the jungle unharmed!

I walked down along the water again and it seemed as though it was different water from this morning. Much more turquoise in color and quite beautiful. I even considered taking a dip. That is until I walked down to see what a fisherman had pulled out with his net, only to see it filled with jellyfish. One was gigantic. That quickly made me very happy being a land creature at that point in time. I'd rather be hot and sweaty than covered in jellyfishes (and potentially stung).

I found a nice piece of shade under some palms and just sat. Happy to be in this place. In this moment. Truly grateful for the experiences that I've had along the way. This trip was exactly what I needed. The universe's way of picking me up, putting me on my feet, and giving me a giant hug to go along with it. I know some people don't enjoy traveling. I will never understand those people (as they will likely never understand me) and that's ok. I know that when I travel, adventure, explore, a new piece of me is ignited. My flame for life burns brighter through travel. But travel will make you hungry, like a drug. Eager for new experiences, to reignite that spark that can so easily be filled by the day to day, the requirements, and by those who truly don't understand your soul. If travel isn't your thing, do whatever it is that makes you insanely happy, take chances, scare the shit out of yourself from time to time, follow your own path, find your tribe (I've met some of the most amazing people while traveling...if you're doing what you love you will find people doing he same), most importantly just live. Squeeze every drop out of this life. Rather than "I wish I would haves" fill it with "holy shit I did that's". You only get one chance, one journey.

Ok now that this amazing view and sea breeze got me feeling some sort of way...back to travel blogging (and making kick ass memories)!

I went back to the hotel to cool off for a minute and to "freshen up" if that's even possible in this climate. Then it was time to head to the Krabi Town night market for what I imagined would be like many of the night markets that I had been to. This was probably one of the better ones. Less souvenirs and more food. Yum. I ate my way through it, sparing no one! The winners were the "fried" ice cream (which easnt fried at all) and the pork on a stick. Amazing. I went back for seconds on that one! I bought a few things, gifts for people, and some more Thai herbal fix it all balm stuff and then before I knew it it was 9 and time to meet the van for the ride back to the hotel! But not before I grabbed a mango and sticky rice for dessert! 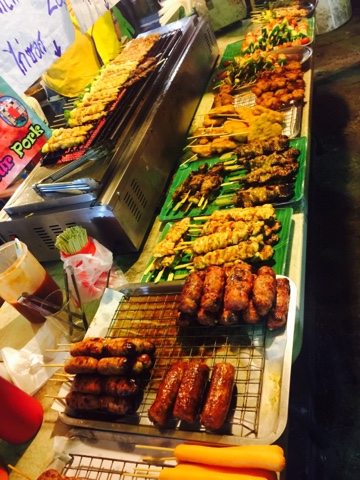 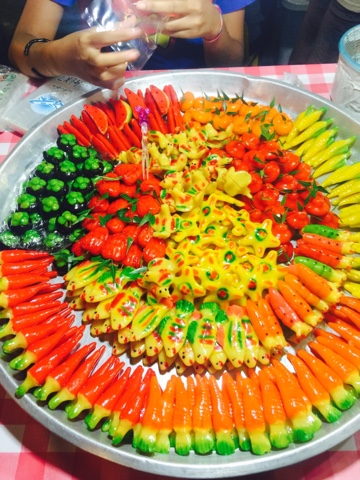 As I was walking toward the exit of the market and the van's meeting point, a cute little Thai baby boy (probably 1 or less) dropped his balloon animal, he was in his moms arms so I grabbed it up for him and went to hand it to him, as she was coaching him to clasp his hands together in front of his chest to say thank you in Thai. It was such a sweet little interaction and one of the many reasons I love travel. As I was walking away he was sweetly waving after me. Today was a good day.

Now off to bed. Up early to catch the ferry back to Phi Phi island and later on to Phuket for a quick overnight there before country hopping to Cambodia!
2015 Adventure Asia island Krabi see the world single girl on the go Thailand Travel vacation