Day 9: Goodbye Chiang Mai, hello Phuket...and what the Phuk is up with this rain?!

Upon packing my suitcase yet again (for the 5th time so far this trip) it has become clear that there are many things that I didn't need, but there is one item that I have nearly pitched at least twice, it's by far the dumbest thing I've packed, it takes up useful space (not much weight) and makes me laugh whenever I see it, what is it? My water bottle. When traveling to Thailand do not bring your water bottle with you, you can't drink the freaking water, nor would you want to, unless shitty (literally) water is your thing, then by all means pack away!

So yes, as you can see, today is another travel day! I'm exhausted since I didn't get back until almost 10 last night (that's a late night for this early bird!). Up early trying to pack (aka: figure out what stuff can be packed together because it's nasty, and what stuff I don't want to touch said stuff, because it's 1. not nasty, or 2. clean-ish.

I had to leave the hotel too early to catch the breakfast that was complimentary with my room, but my hotel (De Lanna) was so sweet to pack up a nice boxed breakfast for me to take to the airport so I wouldn't be hungry!

The flight to Phuket from Chiang Mai is about an hour and 45 minutes. And of course they feed you. So much nicer traveling in Asia than the U.S.  I can't say that enough!

Upon landing it became evident that my luck with weather had quickly come to an end. You see, despite being "rainy season" my only encounters with rain had been at night. Phuket brought rainy season in full force. It was pouring. So sad. I was hoping to do beach things. Perhaps it will clear up!

The ride from the airport was interesting. I thought we were going to hydroplane off of the road no less than 10 times but the driver seemed unphased in fact there was no attempt to steer away from the large water masses or to slow down. Perhaps I don't know what I'm doing when it comes to diving in the rain.

The driver spoke no English. Which is slightly less Thai than I speak. I've picked up a few key phrases and finally say them in the gender appropriate way as to not make people laugh. Ride from the airport to the hotel was about 45 minutes to an hour. 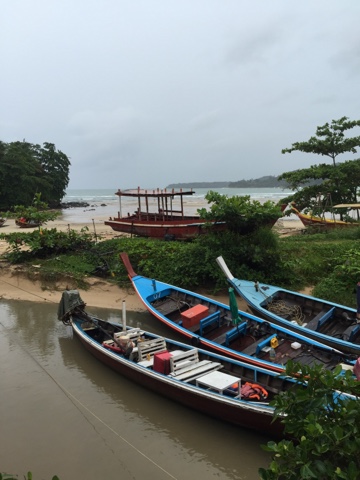 It was really hard not to be in a stank mood. I had a little over a week of sunny skies and now doom and gloom when I hit the beach part of my trip. Pouring rain and a forecast that doesn't look too promising for the remainder of my stay. I purchased a 20 baht poncho from the 7/11 and headed on my way to explore. The other thing making me stank was the hotel. It is gorgeous but not near the action. It's a perfect couples getaway hotel, super romantic. But I'm single, and traveling alone. This was not the welcoming environment for that. I had to give myself a little mental pep talk (aka snap out of it you're in Thailand) and shook off some of the stank and I was on my way. In the rain. Getting drenched! I walked all of Kamala and realized there really isn't much to it. 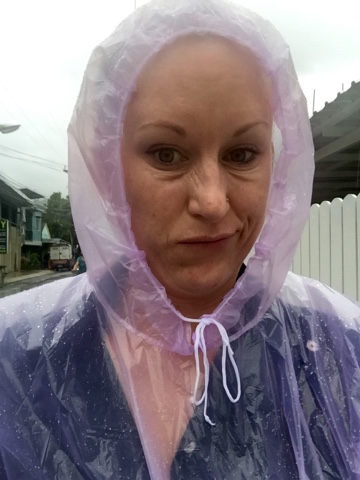 The hotel offers a shuttle service to the more populated area for 150 baht round trip so I think I'll head over there to check it out! Or maybe I'll take a nap. It's my vacation I can do what I want! Speaking of, mango and sticky rice sounds pretty amazing right now...is there a point where one has consumed too much mango and sticky rice? I think no. 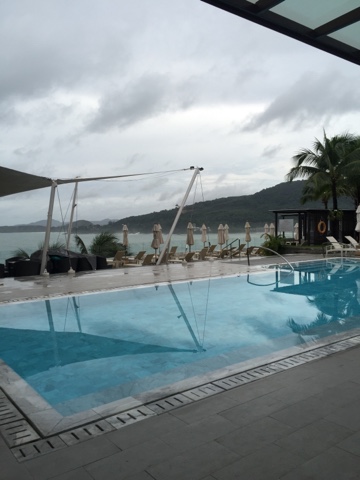 Things started to look up...way up when I went outside on my balcony to hang some clothing that I had just "sink washed" and low and behind what's hiding around the corner but my very lovely ocean view jacuzzi on a very private balcony. Yes please.

In addition, the rain stopped, finally. So I again ventured into town. This time I was on a mission, I got this wild idea to rent a scooter tomorrow. So I went and found the place that rents them, 200 baht per day ($5!!!!) so I will likely be lost somewhere on this island, on a motorbike! It's been a while since I've ridden a scooter, I don't have the faintest idea he rules of the road here (as far as I can see there are none), and I have no clue what side they drive on...so yeah this sounds like an awesome idea! In going to try to find this Gibbon Reserve that's way up in the jungle in the middle of a National Park (that also has a waterfall), let's see how lost I get! No GPS on these ultra modern (ha!) motorbikes.

In the way back I got mistaken for being German. I can't tell you how many times that happens. This one was funny though because even though I politely responded (in English) that I don't speak Deutsch, he apparently wasn't buying it because he continued the conversation in German! What's even better is that he could speak English! When I gave him the deer in headlights (he was speaking really fast and I can understand very little German) look he did the German English combo. It was a funny interaction!

I'm hoping that renting a motorbike will help get me to the other parts of the city, and perhaps for just 3 seconds, away from the "hello...madam" (in a creepy Jafar voice as they try to sell me 10 pounds of shit that I don't want)... 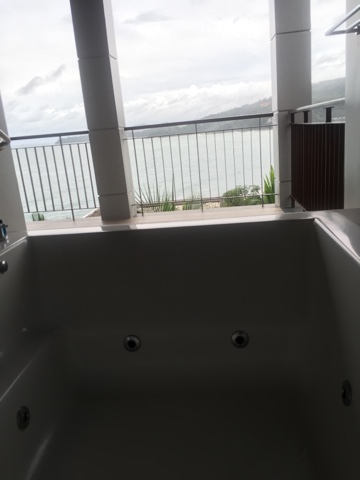 Accomodation: Cape Sienna Hotel (in Kamala), I booked through Hotels.com and got a good special (off season) that included breakfast within the room

Airport Transportation: I pre-arranged for the hotel "limo" to pick me up for 1300 baht, had I know, I would have just taken a cab, from the airport it's a flat rate of 700 baht, your best bet is the flat rate cab from the airport. There are plenty.
2015 Chiang Mai explore fly Phuket see the world single girl on the go Thailand Travel