Some things you're meant to say goodbye to, Thailand is not one of those things for me. It truly is a "see you later" moment. I know I'll be back again...soon, hopefully many times in the future. Still, doesn't make leaving any easier. I have over 900 pictures from my journey, all with amazing memories attached to them. But, it's time for a new adventure, and another passport stamp, as I head on to Cambodia!

I had a bit of a slow start, being lazy and enjoying the comfy bed and beautiful view (from the comfy bed!) went to breakfast around 9 then made the spontaneous (and slightly irresponsible) decision to go to the pool for my remaining time, rather than pack! I paid the price when it came check out time! There's no telling what is where or what I will open my bags to reveal when I get to Cambodia tonight but how could I pass on a beautiful day in Phuket? I had not had one of those! 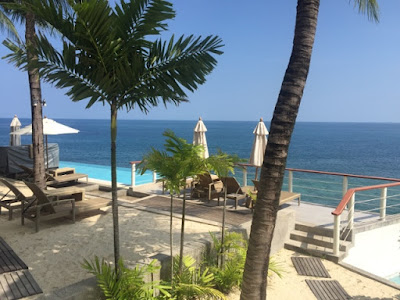 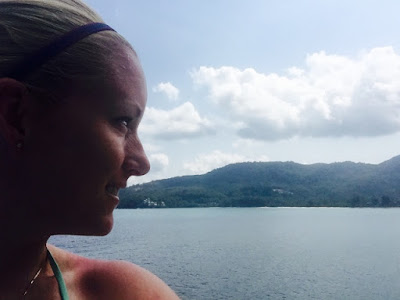 It felt kind of weird showering and getting dressed in "actual" clothes for my flight. The past 3 days I have worn a bathing suit all day every day! Not sure why I bothered with the shower, the second you step outside your skin is wet. It's so hot and humid here, you instantly become gross!

Thailand has been an amazing adventure. To say it's been the trip of a lifetime would be doing it a disservice.
On to Cambodia we go! I had arranged a pickup for 1:30, which left an hour to get to the airport then putting me there 2 hours early...within my travel comfort level!

Unlike anything in Thailand thus far, my driver was not only on time but he was 10 minutes early! And wouldn't you know, the second that we pulled away, the rains started...and didn't stop!

Not entirely related, but I've become a master of the public restroom useage, this may seem like NBD to most but some restrooms here are nasty, and super limited on space. I'm traveling with a pretty big backpacking pack, and a rollerboard carryon, so you catch my drift when I'm telling you I cram all of that into the bathroom stall. Even more impressive is my newfound skill, using the restroom (mind you I def don't sit on the seat) with my heavy pack still on. Oh it can be done! You don't want your things touching the floor. Some people seem to go buck wild with that water hose that you're supposed to use to "clean yourself" I entered a stall once that looked like someone went in there and just started spraying in all directions, even the ceiling had droplets. What?!

Flying Air Asia is an interesting experience. Perhaps I'm used to that catered lifestyle I've been living as an elite traveler with Star Alliance members (it has it's perks!) but damn. I felt like I was at a cattle auction trying to get on the damn plane. There was no order, no control, it was a complete free for all and I'm certain it was also a fire hazard with how many people were jammed into that jet bridge. Boarding a plane in Japan there's a very distinct queue, there's no pushing, single file. Here and with this airline, complete and utter mayhem. And for someone who doesn't like people touching her, yeah it wasn't fun, and I did have visions of throat punching someone. Thankfully it did not happen.

Guess what I found in the airport shop, Tim Tams, aka liquid gold. Those things are amazing. Aussies are lucky! Adina will remember those delicious treats, we found them in Yokosuka (which is the first time I had them!) you better believe I bought a package. I'm afraid to open them, I have no self control and will likely eat the entire package!

Despite today being really nothing but travel, I'm exhausted! I can barely keep my eyes open! I think the go go go of the last 2 weeks is slowly catching me! Hoping to get a decents nights sleep, tomorrow starts early! I have hired a private driver and he's picking me up at 5:30am to catch the sunrise at Angkor Wat!

The visa situation is interesting in Cambodia. You can get one at the airport you just have to wait in a queue. If you don't have a passport photo with you (it goes on your visa I guess) you just pay an extra $2 (so $32 total because the visa is $30). They take US dollars!

My ride from the airport to the hotel was also interesting. If by interesting we're talking inappropriate. The hotel staff picked me up. Youngish guy, I couldn't tell (until he told me his age, 31) he was very concerned that I was traveling alone and this is where the advances started. I'll take you to the market where they have drinking and dancing (uh no dude, I'm not down for that, or any roofie cocktails if that was your next offer. I tried to politely decline in as many ways as possible but this guy was persistent.
Later on the front desk staff who showed me to my room performed a similar song and dance. Are the men all this forward and flirtatious here? It's not Italy damn!
I was happy to get rid of the harem of suitors that I had apparently attracted and close (and lock, first time I ever used the deadbolt on a hotel door!) the door!
Nighty night! Tomorrow is a big day filled with temples! And hopefully not an arranged marriage. Namaste.

Trip Info (for the last few days, sorry, I was behind on that!):

Ferry: I got pricing from my hotel, then I ended up booking on my own through Phuket Ferry as the pricing was way better (and include hotel transfers)

Hotel in Krabi: I stayed at the Pakasai Resort. It's location is great if you want to stay in Ao Nang (I found that area lovely and could arrange transport to Krabi Town for the night market for 250 baht round trip) Ao Nang is the side of Krabi that has the beach (and the long tail boats going to the various islands). The hotel itself was outdated and staff wasn't that friendly, but it served it's purpose for what I needed. I do think there are probably other hotels in Ao Nang for a better deal and with better staff, what drew me to this one was the "green" hotel part. I booked this hotel through Hotels.com as they had a really good rate (off season) when I booked.

Hotel in Phuket: I stayed in the same hotel as before, Cape Sienna, it's in Kamala. If you want the action (bars, strip clubs, massage, etc) that's all in Patong, about 5 km or so from Kamala. Kamala is a bit of a sleepy beachside town. I also booked this hotel through Hotels.com for the same reason as the one above.

Flight: Unfortunately there was no Star Alliance flight option within decent pricing so I got a steal on a flight through Air Asia...a discount airline where you can buy the extras (seat choice, checked luggage, meal, etc)

Phuket Airport Transportation: My hotel charged a ridiculous rate for this, so knowing that from the airport a cab is a flat rate of 700 baht, I looked online and found the same rate, for a private car transport. I went through Phuket Shuttle but there are many websites that come up when you search