Day 7: Goodbye elephant camp, hello Chiang Mai and modern luxuries! How do you get the smell of tiger out of your clothes?!

Didn't sleep well at all. So many ants. When I finally did get to sleep I was able to sleep until 7am. That's the latest I've slept to date. Definitely was looking forward to getting breakfast and getting into the city and to my hotel. 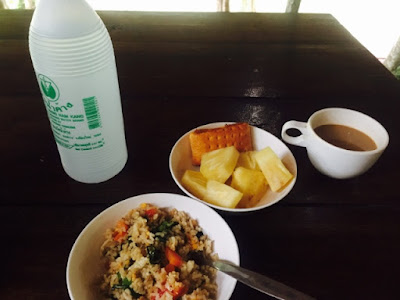 My final breakfast at the Chai Lai, I must say I've never eaten so much rice. The staff was so sweet and kind there I will definitely miss that personal and "home" feel that you don't get in larger hotels.

I took a songthaew from the Chai Lai into the city (Chiang Mai) to my next hotel (De Lanna). I was quite early so my room wasn't ready. I walked through the old town for a bit, had a delicious lemon soft serve to cool me off, then headed back to the hotel where I had hired a driver to take me to the Tiger Kingdom. 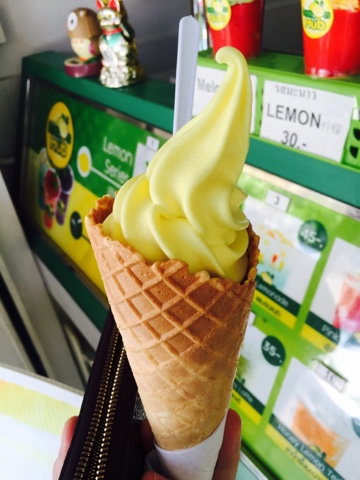 I was so reluctant to do this. On one hand I really wanted to see the Tigers (and hold the babies) but on the other hand I was super concerned about the well being and treatment of the animals. I would hate for my money to go toward supporting unkind practices with animals, and I can't stand animals being in captivity. So this was a huge risk. I did ask many Thai people about the treatment of the animals and if they were drugged, I was assured they were not, but this is also a conversation that happened with two different languages, so who knows. 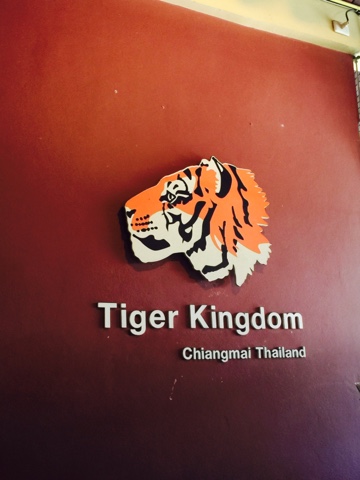 I could bombard you with eleventy million cute pictures of tigers but I won't. I'll share a few of my favorites on the blog. I started in the newborn area with the white tiger. She was a feisty thing and wanted to grab and paw on my arms (ans chew my fingers). You have to be fairly sterile with them because they are susceptible to disease that the larger ones carry

After that I went on to the biggest tigers (you can buy any amount of visits in the cages no really only had interest in the big mofos and the itty bitty ones. The first large tiger that they brought me too was agitated with another tiger in a neighboring cage and was growling the entire time I sat next to him. I gladly moved on to the next one when they suggested that "he's hungry"...goodbye! I visited 4 large tigers within that cage. They are gorgeous and huge! 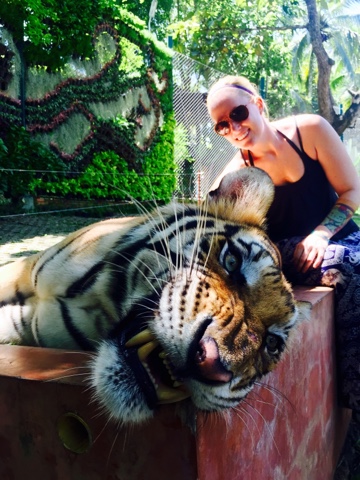 They kept trying to have me lie on the tiger. I was less than ambitious to do that it I played along temporarily.

There are screens all over that indicate that they do not drug the tigers and that tigers who are drugged have their eyes wide open always. While these did not have their eyes wide open always they were rather lethargic. Granted it's really hot, and I'm not keen on the patterns of tigers, but at least with the little ones they were pretty spry and moving about. I'm going to be blissfully in denial and believe what I've been told about them not being drugged. Aside from that they were in nice size confinement and were well fed. The staff handling them did so with care.

Sitting on cloud nine from that experience I found my driver and headed back to Chiang Mai (45 minute drive) to shower, finally get my room, and get out into the city to explore. I can't tell you how nice it is to have AC, and no bugs. I'm just not cut out for camping or anything close to it, and 3 nights of doing just that was WAY beyond my comfort zone!

Around 6pm the neighboring street shuts down (on Sundays) for a walking street market, it's filled with vendors of all sorts (souvenirs, food, massages of all varieties, etc). When I started out the sun was still scorching (and I clearly hadn't had enough water during the day) so I ended up feeling like absolute crap. I ate some small yummies along the way, purchased some durian to try to eat, and I just couldn't do it. I opened it up, and the smell is like none other, I don't know how people put that in their mouths. It's worse than raw sewage. I threw that mess away as quick as I bought it and hoped to hell none of the stink juice had gotten on my hands (thankfully no). I didn't buy much other than food in the market, oh and some voodoo healing herb balm stuff, there were several to choose from, I bought the one for bug bites (since I probably have malaria from all of the bites I have) that also happens to work on headaches, it smell lovely and I put it on all of those bites as soon as I got back to the hotel, what do you know, they stopped itching!

I have another busy day tomorrow I'm going to see the Karen Longneck Tribe as well as exploring some of Chiang Rai (and hopefully taking a quick boat over to Laos)!

Accommodation: De Lanna Boutique Hotel, I booked directly through their website, they had a great special going on and my rate was 40% off (includes  breakfast too!)

Transportation (from Chai Lai): Songthaew (basically sitting on a wood plank in the back of a pick up truck with other passengers too, totally safe...safeish

Excursions: Tiger Kingdom (I arranged a private driver through my hotel, it was 600 Baht round trip) and then you just buy tickets at the Tiger Kingdom depending on which package you want (how many different cages you want to go into). Their website has all of their pricing as well as hours of operation
Adventure Chiang Mai Eco Travel Elephants explore Food herbal remedies night market see the world single girl on the go Thailand Tigers Travel