Woke up rather early today and headed down to breakfast. I had lofty plans for my partial day in Cambodia, so there was no time to waste...but I was so freaking tired! Slow moving is an understatement.

Breakfast had fresh cut mango today. I think I died. I filled a bowl and sat happily at my table devouring it. I may possibly turn into a mango in another life, I think that would be ok! 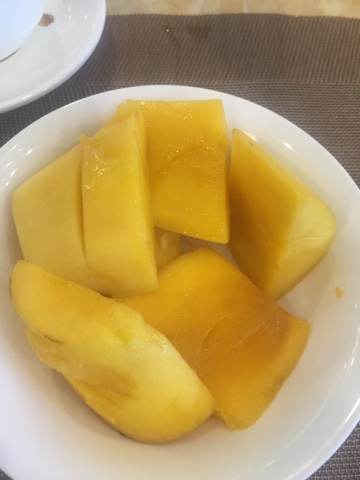 Despite having a very organized suitcase upon arriving here, it now appears as though a tornado has ripped through the damn thing leaving havoc all over the hotel room. This resulted in unpacking and repacking to try to restore some order as the next two days are basically travel days in various countries, one of which I will have my luggage, the other I will not, thus needing clothing in the carry on to be able to not be so foul!

I went to the pool for a bit and relaxed before realizing I really should be packing, so I headed back to the room and organized my clutter. I really do need to start packing better. Will start looking up minimalist packing vids on YouTube. After this trip!

I checked out of the hotel at 12 and had planned to take the tuk tuk to the airport as I was not wanting a repeat of the can incident I had at pickup (and because the tuk tuk was cheaper) but the hotel manager indicates that he would bring me in the van. I have to admit that I was forcefully declining because at first I didn't realize that he would be bringing me and again I thought I'd be in the car ride from hell. I felt horrible for giving him an attitude when I quickly realized that he was driving. He was a wonderfully nice man and we had lots of great talks about Cambodia, the countryside, and other areas to visit on a return trip. He apologized profusely for his employees behavior (he had just seen my review on trip advisor) and indicated that he would talk to him and provide some training/guidance so that wouldn't happen again. I thanked him for caring about it and making the situation right. I will be making an amendment to my review to include his very professional nature as he went above and beyond by personally driving me to the airport for free too.

I have come to realize that the one thing I have purchased most in Thailand and Cambodia, besides food of course. Had been balms of various natures. Now granted not all of them are for me, but quite a few are. I'm all for the herbal medicine. And I tell you what, an excess of mosquito bites will make you buy just about anything that promises to work! Today at the airport I squires another one, white tiger balm. I put that shit on my feet (I have no less than 20 bites there...please don't let me get Malaria) and it felt like an inferno and great freeze all at once, but I tell you what, I didn't feel those f'ing mosquito bites...and it smelled so strong o couldn't smell my repulsive running shoes that have over 200 miles of running plus 20 days of walking around sweltering temps in them barefoot. Yeah they are nasty. I might throw them out in Bangkok.

Today is my first flight in a series of a few on the voyage back home to Japan. Granted I'll be stopping in a couple of countries before I'm back, but ultimately my vacation is over. And that is something in just not willing to accept nap, for the next couple of days, despite traveling, I'll see what kind of trouble I can get into to really prolong this vacation and continue living out loud. This may be the end of this journey but believe me there is much more in store, a big huge world full of Miss Adventures to be had!

My driver (same guy who brought me around Bangkok the first time) picked me up at the airport. We were chatting on the ride and he asked me if I always travel alone, I could tell he was curious, like it was a foreign concept to him (mind you I've gotten asked 29474747times if I'm traveling alone and been given strange looks the entire trip so it's not out of the norm). I explained that I really prefer traveling alone, the perks, that it's easier, etc. his response was process and probably one of the sweetest things he could have said to me "Thai women not strong like you are" now I'm not saying it's sweet as a dog on Thai women, I know some BA Thai women who are amazingly strong, stronger than me. But my independence is something that I take pride in, and a compliment to that just might be the highest form possible!

I arrived at my hotel just as a big storm was approaching (the sky wasn't just black, it was green!) and checked into my room (I was shocked at how nice it was, definitely one of the nicer hotels I've stayed in in Thailand!). I did a quick luggage re arrange and tried to get myself as organized as possible, this will be the last time I see my big suitcase until I get to Japan...what do I NEED...?!
Food, that's what...

Driver: Booked through Beyond Bangkok (when I booked the other portion). He was very friendly, professional, had cold water available for me, I was very happy with this service.

Hotel: I stayed at the Best Western Amaranth Suvarnabhumi Aiport location. I booked directly through Best Westerns website after price shopping. They had the best deal with the most inclusive options (got a great deal on a premier level room...it's one of the nicest hotels I've stayed at in Thailand!) including breakfast. Wifi is good! They have a free shuttle to the airport!