August 06, 2015
8/7/15
Well I didn't get much sleep. I was pretty hot. The nature sounds were really relaxing (especially the rain) but I was never really cooling off.
I wish I had brought a flashlight with me. The bathroom is a separate are (I have my own but it's around the corner from my room and locked so having a flashlight would have been helpful for after dark potty runs!
This morning I woke up to the dogs waiting for me outside of my room. I thought how sweet it was, then I noticed that one of them pissed on my shoes I had left outside the door. I'm not see that we can be friends anymore.
I woke up early to go on an elephant trek. Not sure what I was expecting but it was pretty amazing. And exhausting because well I didn't want to die. I engaged every single muscle trying to hold on for dear life! My elephants name was Sibuea (so?) she is 48 years old. She was a bit of a sassy pants. From time to time she would spray dirt up from hertrunk at me, I couldn't help but think it was intentional! After the trek we finished off in the river where I was on the elephants back as it took a dip (and thus so did I). If you do wish to ride elephants in Thailand please do your research into the care and treatment. It's best to find a place where you can ride bareback. The cages/seats are heavy and rough on the elephants (and that's what you predominately see in Thailand) I personally was not comfortable with that and only was willing to go if I could go bareback and if I was able to observe the care and upkeep of the elephants. I can't say enough about Chai Lai Orchid and their love for humans and animals. 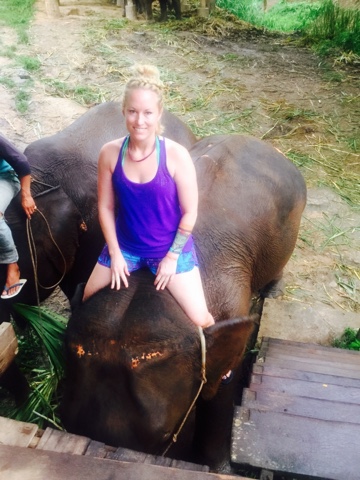 I have a video of that but I can't access YouTube here it gives me weird error messages so I'll wait until I'm in the U.S. to upload those! There are about a million pics of me riding the elephant thanks to the sweet staff at the chai Kai who literally followed me around as I was on this trek with my phone so I could have pictures my plan was to bring my phone and snap them myself, that never would have happened because I had a death grip on that elephant! Was able to see the sole dude in the pack as well (actually there is one more boy, but he's only a baby), he's a pretty fella. 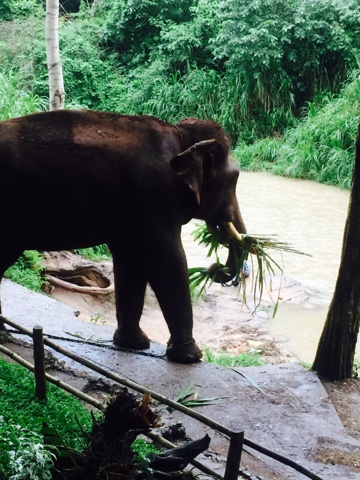 After that it was breakfast to fuel up for some mountain hiking!
I met up with the guide and after a quick 5 minute ride in the back of a pick up truck we were off on our hiking adventure. We hiked to a beautiful waterfall where we had the option to swim (I opted not) 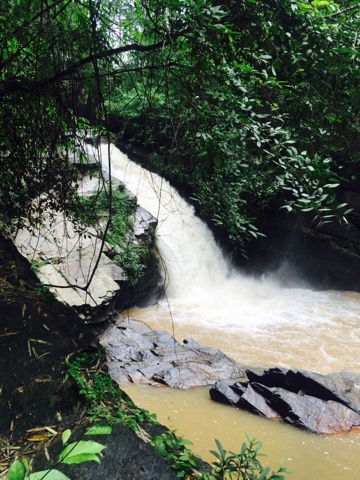 Despite being really sweaty, that water was really brown and not my thing! I met a really neat couple on the hike, they were on their 6 month honeymoon trip through Asia. 6 months!!! It was awesome hearing about their adventure and giving them tips about their next stop, Japan! 6 months of traveling and get this, they only have hand luggage (carry on)!! I am impressed and ashamed at how much I brought!
We hiked to the Maewang waterfall then headed off into a hill village for lunch.
Along the way we walked through rice paddies and our guide picked mushrooms and other things from the woods to add to our meal. Our guide told us that Cobras and many other dangerous snakes live in the rice paddies (but only come out at night) and that if you get bit by a cobra you have to get to a village healer in 5 minutes or you will die (no one goes to the hospital...it's too far away and they use herbal medicine in their tribes instead)
He also told us about tarantulas. You can eat two per year and they make you strong. If you eat more than two it will make you go blind (forever, no herbal healing for that!) I'll stay away from those! We did see a tarantula whole into the dirt but he said the villagers already cut it out to eat so there was no spider in there. 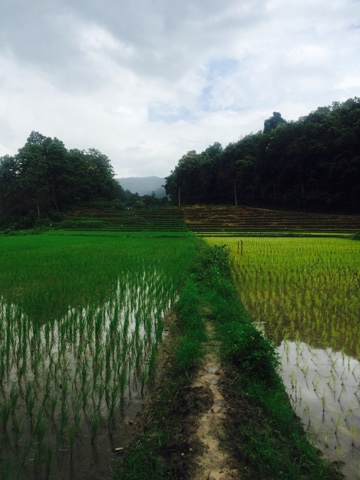 It was at this point in the trip that I realized, malaria is a very real possibility and I'm ill prepared for it. Here's to hoping that the million bites I have aren't full of poison!
The village where we had lunch had some beautiful woven goods. The colors are so vibrant. 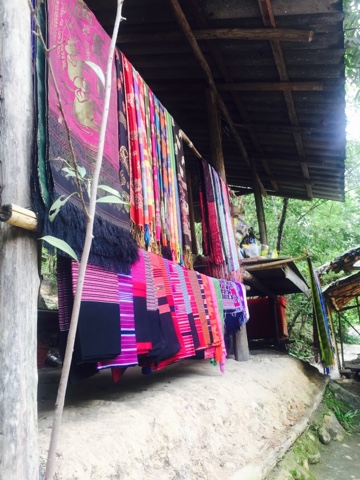 More hiking ensued (a total of 6 hours including lunch break) and eventually wound down to the Karen Village for a quick stop before boarding into the back of the pickup trip for a 15 minute ride to the river drop off where I got onto a bamboo raft and rafter back to the Chai Lai Orchid! At this point I was not only exhausted by 7 kinds of filthy so I showered and headed to dinner and now my friends, it's bed time! So tired!
Adventure Chiang Mai Eco Travel Elephants explore jungle see the world single girl on the go Thailand