August 08, 2015
8/8/15
Sleep was nearly impossible with the various nature sounds. The roosters internal clocks are WAY off. The dogs on the property barked outside of my door in the middle of the night and kept me up, starting again very early in the morning. Then there are the eleventy billion bits I have on my body something on my foot I'm chalking up to ants or some kind of poisonous plant. All in all I think the relaxing lazy day is much needed! I had to switch rooms today from the riverview to one up in the elephant camp.
I went down for breakfast and just kind oflounged around for most of the morning. I crossed the crazy suspension bridge to the other side of the river and spent some time playing with a young elephant. 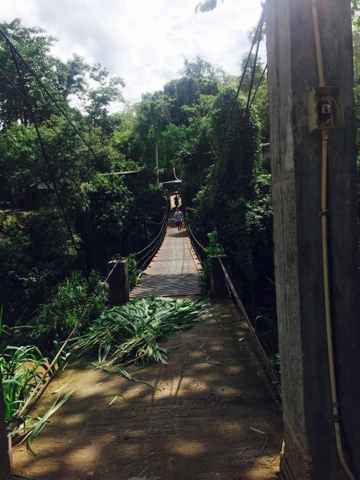 The Mahout even got him to give me a big kiss on the cheek with his trunk. Today was room switch day so I lounged around at the cafe (Internet has been down since last night) and read some on my iPad (kindle app).
I feel like I've exhausted the things to do here (2 nights is more than sufficient) and kind of wish that I had cut mysbtay short a night to head into Chiang Mai for that additional day. Either way my plan is to get up tomorrow morning, eat breakfast, and head on out. This place is great don't get me wrong but I'm ready for AC and far less bugs. I've been eaten alive here (and that's with bug spray)
Forgot to mention this in the post from yesterday but during he raft ride I saw all of these pipes going from building emptying down into the river, after closer examination it became clear that sewage and septic systems do not exist here. Hence not being able to use/flush TP. The bathrooms go straight from toilet to river (same river I "swam" with elephants on and same river I floated down yesterday. Also the same river I observed numerous times today, elephants popping on. Probably going to have a parasite of some sort.
Lunch was ok (surprisingly my least favorite dish yet. I tried the "staff favorite" mango chicken and wasn't super thrilled with it. What I have gotten used to is my "fresh young coconut" that I like to have with meals! I drink the water then eat the meat...so tasty! 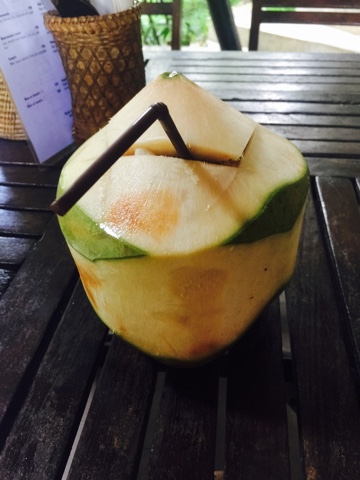 Biggest decision for today has been when and what I will eat. Not having internet since last night has been a huge struggle, especially since I have 2 online classes that in teaching. In addition to the reliable internet, what I'm looking forward to most about tomorrow is the luxury shower, air conditioning, and the absence of bugs. Oh and laundry. I must find laundry!
Also on the agenda for tomorrow is the Tiger Kingdom (I plan to do that on my way in to Chiang Mai from the Chai Lai Orchid.
2015 Chiang Mai downtime Eco Travel Elephants explore nature see the world single girl on the go Thailand Travel vacation