Today started off, well, slowly. I'm exhausted. Like my eyes are swollen and refusing to open fully, that kind of exhausted.

I woke up got myself ready and headed to the hotel breakfast. Holy spread. Seriously amazing. It was actually overwhelming and took me probably 5 minutes to put a single item on my plate because there were so many choices. And the fresh fruits and juices, I could get used to this! Yeah yeah that's bread pudding on there too. Judge away. It was amazing (once I picked the raisins out!)

I thought that I would get a nice 2 hour nap on the drive out to the floating market. I actually had to laugh when I got picked up at my hotel on the large van that was exceeding capacity. So much so that I was crammed in between the driver and the tour guide in the front (you know on that seat that isn't actually a seat) oh and the motor is right under it so my ass was on fire for 2 hours and my legs were on the dash. I literally laughed out loud at the comedy of errors. Here I was expecting a nice climate controlled tour bus. This is Thailand. Stupid American! 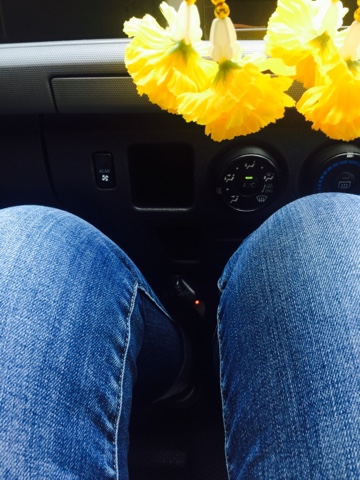 On the way to the floating market we stopped at a factory that makes coconut sugar. It was neat to see the process but more importantly they had a toilet. Or something resembling one! No paper in the toilet and use the bucket to flush. A bit more rustic than I am used to that's for sure! 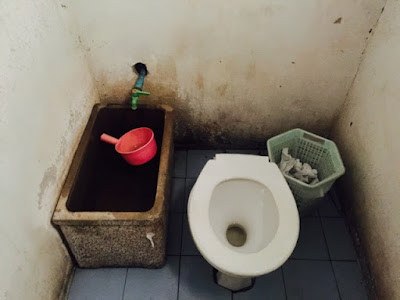 We arrived at the Damnoensaduoak Floating market and first boarded our motorized boat that then brought us to the paddle boat that took us through the actual market part. To day this was an experience was an understatement! I definitely recommend it. Unfortunately it's a bit of a tourist attraction so my recommendation would be to get there super early because it gets crowded quickly and can take some time to get your paddle boat. When you're done you can also walk the market and shop. Bargain. Things are considerably higher prices than in Bangkok, but you can definitely barter to get them down around the same price. I bought some Thailand pants for 150 Baht (higher than Bangkok but a print I have been looking for). 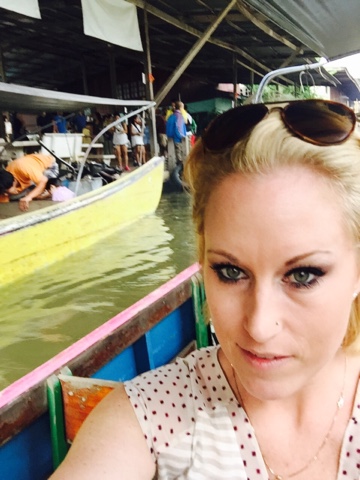 I wore jeans today and a short sleeved shirt (as to not offend Buddha) and let me tell you, not a good choice for the floating market. It's hot there. Very hot. And often when you are on the water you are in direct sunlight. Wear the sunscreen and much lighter clothes! 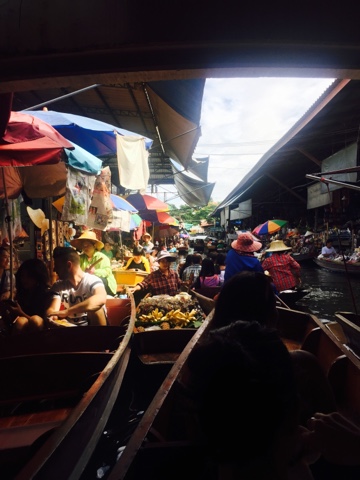 After the floating market there was a van shuffle and I was transferred to a different one heading back in to Bangkok where I would eventually end up at the Grand Palace. I was under the impression that the tour included lunch so I never ate. Lunch, it did not include. I became hungry. Quickly.

The Grand Palace is huge and filled with tourists. Way too many people for me. The Emerald Buddha is housed there but unfortunately it was closed off (the king is ill and in the hospital, he's 86, so they have monks coming in to bless and pray over the Buddha for the king)
Many of the things in the Grand Palace do not allow you to take pictures. While it's definitely something to see, I recommend doing it first thing in the morning before the crowds get bad. 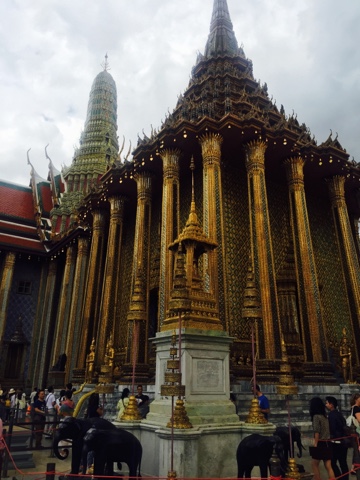 There is gold everywhere! They even have a replica Angkor Wat (from Cambodia) because it is ruled by Thailand. There was a brief moment of peace in the chaos and at that moment two monks appeared walking right into my picture, it was my favorite part of the Grand Palace. 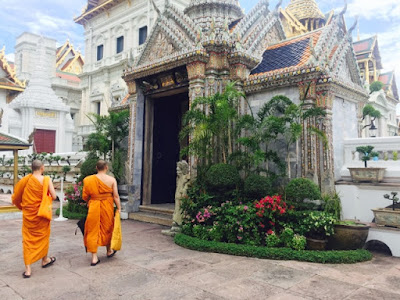 At the Grand Palace (outside the Emerald Buddha) you can participate in several different rituals. I only opted for one. The lotus flower dipped in holy water that you then dab on yourself (shoulders, head, etc) and it's said to bring you money, love, health, and happiness. Lotus is the only flower that the Buddhists use for ceremony.

On the way back to the hotel we were stuck in traffic. The roads were completely shut down and police came out of nowhere. This happens when anyone from the royal family leaves the palace to drive somewhere. So I had a royal sighting, I have no idea who it was though! The king and queen have 4 children and they live (with their families) in the palace too. The Kings son who is heir to the throne is in his 60's. You don't even need google for that shit!

Because traffic is such a nightmare it took over an hour to get back to the hotel. Because I thought lunch was included (and it was not) this meant that I had gone all day (with the exception of drinking coconut water) without food (after breakfast of course). I need food. The rest of society needs me to eat food. Trust me. It gets ugly, and it gets ugly quickly. The entire afternoon was a bit of a blur other than the mantra I remember playing in my head, you don't want to be on locked up abroad for killing someone due to Hanger.

You know when you get so hungry that you can't find a single thing to eat. Yeah that happened too. You know what's a total lifesaver in that instance? Room service. I am normally completely ANTI room service, the food usually sucks, it's super expensive, and all in all a total let down. Wrongo in this case. It was very decently priced, had local cuisine (and dessert) and enabled me to strip down, shower, and try to regain human status in the comfort of my room (once I finally got back there).

Another busy day tomorrow, the adventure in Bangkok may be ending, but tomorrow we start fresh in Chiang Mai. I certainly won't miss the traffic (I feel like so much of my time was wasted here in Bangkok, sitting in a car, stopped on a road) but I was surprised with the city, and would come back again (no tours, just do some good solid exploring on my own! Can't wait to get out of the crowded city for a bit, bring on Chiang Mai, I'm told it's one of the most peaceful/serene places to visit...Namaste!
2015 Adventure Bangkok Emerald Buddha explore Floating market Grand Palace I've got the golden ticket passport to the world see the world single girl on the go Thailand Travel Tuk Tuk