Day 15: Cambodia...Temples (Angkor Wat at sunrise)! And I need a hammock!

I got only 3 hours of sleep last night and had to wake up and be out the door to meet my driver at 5am to catch the sunrise at Angkor Wat. I was exhausted and my eyes would barely stay open!
As you near Angkor Wat you see tons of tuk tuks with people doing the same thing, heading in for the sunrise.
You can purchase a 1 day pass or a 3 day pass to the temple, I got one day and it was expensive (in my opinion) at $20, I have no idea what the 3 day pass costs. They take your picture as part of the pass/ticket. Not flattering.

**update: this ticket gets you into all of the temples, much better deal! So don't lose the ticket or else you have to buy a new one!**

When I finally settled in, on a slab of wall outside of Angkor, along the mote. I realized how worth it it was to wake up this early. It was peaceful. The sunrise was stunning. The backdrop was indescribable. Angkor Wat is a World Heritage site and rightfully so.
They say that when you see the sunrise at Angkor that you see 7 colors...I don't know if I saw 7 but the sky was a beautiful site...even at 5 something in the morning. 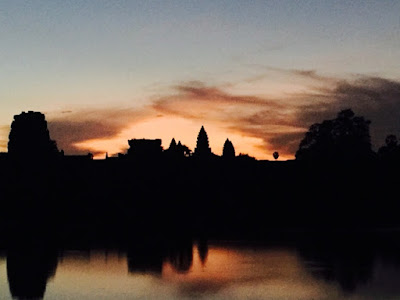 What shocked me was how many people were selling things, on the walk into Angkor Wat as well as inside, it was aggressive. The people with the temple books would block your way even after you said "no".

Speaking of saying no, don't get sucked into the incense/Buddha trick that I fell for. As I was entering the temple I was handed a few things of incense that were lit, I didn't want to offend and figured it was something you had to do as you entered so I followed the instructions. When it was all finished there was a firm instruction to leave $20 for the monks...what, that's some bullshit, I've never seen people leave money on a Buddha statue. I felt with 100% certainty that these guys were scammers, but just in case (don't want to piss off Buddha) I lied, said I didn't have $20, and gave them a $5, not sure what Buddha would be more pissed about, me lying or me not giving anything at all.

I walked around for a while, managing to see the entire thing on my own. There's no need for a tour guide, so many people hire them that you can't help but be surrounded by other people's tour guides so you can just listen to the facts they are giving and go on your merry way!

The entire thing is open from before sunrise, except for the one part (the center) where you have to be completely covered if you're a female. That opens at 7:40am (closes at 5pm). You climb some insanely steep stairs (with a rust covered railing that will leave your hand stained orange) and are able to walk around the center. 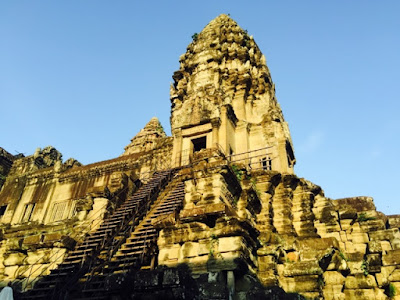 As we were driving out of the park a monkey crossed the street in front of us, then a few feet up on the side of the road there were about 10 monkeys, including a baby hanging on for dear life as her mom was running around. Wild monkeys. It was so fun to see.

From there it was back to the hotel where I was able to cool off, put on some more sunscreen, have breakfast, and take a quick power nap, before meeting back up with my driver to finish the rest of the Temples for the day (I'm hoping to have enough energy to make it to the night market tonight~ 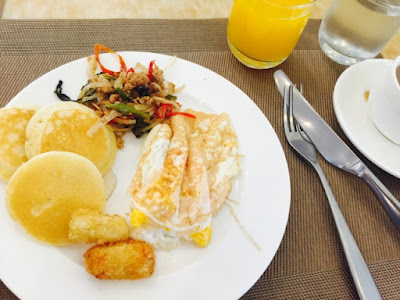 On a side note, I bought postcards...most expensive post cards/stamps ever! 4 post cards (with stamps to US) $10. FTW?!

After re fueling with breakfast it was off to see more temples. Angkor Thom was first. This property is 4km with temples all over it, the first that you come to is the smiling faces temple (there were tons of monkeys near there) 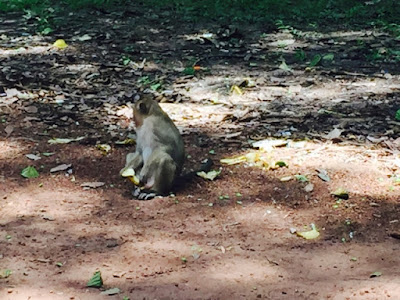 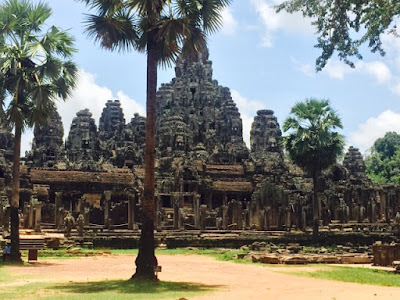 Next stop was Banteay Srey (also known as ladies temple) to was much smaller but the grounds were far more beautiful and offered a nature trail to walk around. At this point if I had come across a part where I needed to put on additional clothing I would have skipped it. Way too hot. Mid day sun, walking in the heat, and despite my attempts to drink water I could feel dehydration setting in. 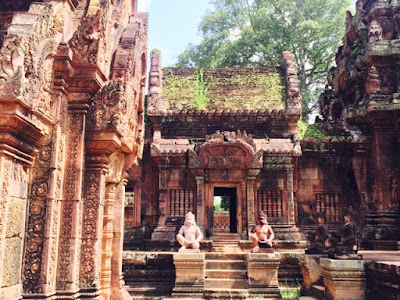 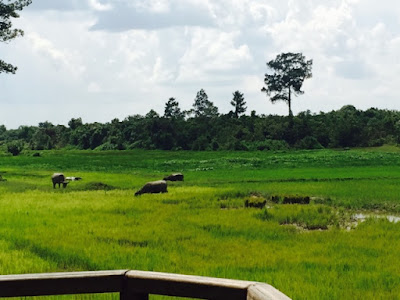 Everyone here has hammocks. Every house every shop, even the tuk tuks maneuver one up when they are waiting on tourists it's amazing! 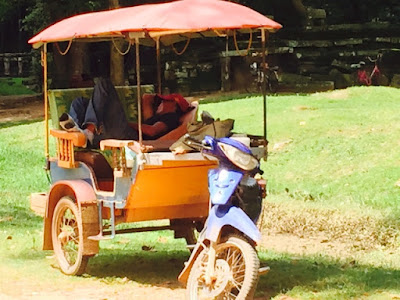 The reason for houses and shops having them and people always being in hammocks is because there is no electricity in most homes and shops so they keep cool with a little self generated breeze via the hammock.

After this is was on the the last stop of the day, Ta Prohm, aka: Tomb Raider Temple (as it's the temple made famous by the Tomb Raider movies). It is the least "structured" of the temples visited today, it appears in shambles for the most part and is currently under renovation/rebuild by a company out of India (UNESCO sponsored). The place is huge. I got lost several times and had to ask for the "East Gate" to realign myself. The trees growing inside have formed around the temple, sometimes overpowering it, and sometimes appearing to grow directly on top. Roots wind everywhere. At this temple the people selling things are the most aggressive. There are many small children selling anything from magnets to bracelets or begging for money. My tour guide indicated (then I saw a sign later within Ta Prohm) that you should not give money or buy things from the children as it encourages them not to go to school, if they make money selling or begging, they will continue to stay away from school. 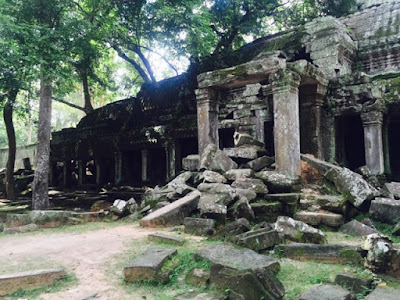 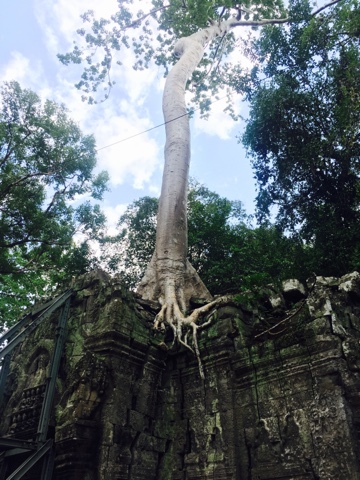 From there I returned to the hotel to literally wash my feet (they were brown from the dirt), change my shoes, change my clothes, and rest a few minutes before heading to the night market in town!

I got to the night market and quickly realized it was not like the lovely Thailand night markets I was accustomed to. Not many street food vendors at all! Mostly restaurants. I don't know, I have no interest in a restaurant, I love the grit of street food, and it tends to be better than restaurants!
I found a fruit shake stand (turns out there are hundreds of those...that's all they seem to sell on the street) and got my mango shake. Disappointing, not fresh and amazing tasting like I've been conditioned to expect. Finally I found some food, and something resembling a convenience store where I could buy some water (as in Thailand, under no circumstances should you drink the water!) and picked a tuk tuk to haggle with before heading back to the hotel. 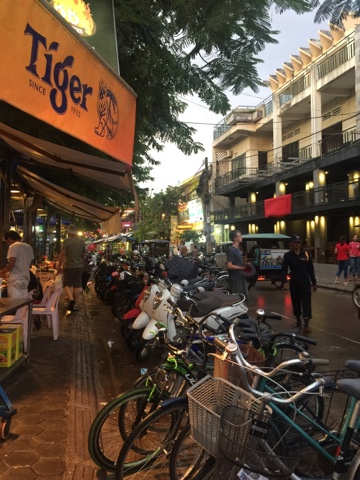 I perhaps should have investigated his tuk tuk better before agreeing on a price...how did I end up in a tuk tuk at night (yes it was dark) with not a single light on that mofo?! I was glad when we pulled into my hotel!

Today really wore me out, lots of sun and lots of walking! Looking forward to some sleep tonight! I have fun cultural/crafty adventures tomorrow!