Things I’ve googled today: is there arranged marriage in Bali
Which then led to a very intriguing read about polygamy and how in certain areas in Indonesia it exists but usually only in the very poor, and the very rich (like high government officials and religious personnel) kind of makes you raise an eyebrow if it’s ok for the super well to do, but then viewed differently when the very poor do it. A status symbol for the rich men to take many wives. And a survival or barbaric and primal existence for those of a lower class. So interesting.

I've also googled: How do American's buy property in Bali. Come to find out you can't technically have property in your name in Bali but there are 3 different and common workarounds to getting your dream villa. Yes I seriously need to know how to buy a villa. Like yesterday

Sapiosexual, and a million other fill in the blank with sexual at the end words that people use on Tinder. Let's be honest I need to know what I'm working with and not find myself caught up in a 5 some cirque de soleil number. Not judging, I'm just not into that kind of 3 ring circus!

The things I need to know before coffee and breakfast!

After breakfast I arranged for someone to come to my villa to give me a pool side massage. I wasn't quite sure to expect from this as the price translated to approximately $10 (and that was more expensive than the ones at the spas in downtown, probably because they come to the villa, rather than me going there). The average prices of the ones downtown were around $7, this is for an hour!


Well to start off with you strip down to underwear (at least I was wearing some!), no bra, just panties. There's no towel or robe or anything, you just stand there naked until you lay down on the bed thing and she puts a sarong thing over you. This sarong is useless and definitely doesn't stay put or cover you for any length of time. For the duration of the massage there were body parts left exposed that normally wouldn't have been left exposed. With a Balinese full body massage every last bit of your modest goes out the window. This woman massaged my butt for what felt like half of the massage. I'm not complaining, it was sore and full of knots from the hike, and well, I like a butt massage! I could see how things were going so when it came time to flip I was slightly paranoid about just how much massaging was going to take place. They definitely are thorough, the massage itself was amazing, and seriously, $10! But I will say, she was all up in my boobs when I flipped from my back, like I said, thorough. So if you aren't prepared for it (like I wasn't per se) now you know. I've definitely never had such a thorough boob massage in my life, even from a dude attempting to cross second base (she kept it appropriate, stayed away from nips, I mean, if there are boundaries when massaging boobs).

Immediately after I regained my dignity and my clothing, and paid the woman for my amazing (it really actually was once I got over the fact that body parts would be exposed and it would have to be totally fine, and well that this was not the standard massage I was used to, I went to gather my things for a walk into town and noticed the most massive spider in my bedding (the canopy to my bed). I had to gather every ounce of everything that I had to slay the beast. Really this thing was the size of my palm, so it had to be an effective swing, one and done kind of magic. Normally I'm not one for killing animals of any kind, but this had to be done, I can't have that kind of nonsense in my sleeping quarters. When I finally got a shoe and managed to kills it (and scream my head off) I left the remains piled on the floor for Ogie to take care of when he cleaned the villa. I just couldn't handle picking that up (what if it moved?!) I was very thankful when I returned from town and Ogie had cleaned, and said spider remains were LONG GONE!

Before leaving for town I had an interesting conversation with Ogie about American life. He couldn't understand why Americans work so hard/so much and don't spend more time appreciating parks and nature etc. I don't understand either and I struggled to give him a response or to explain the American way to him.
Work so hard for what? To die having worked hard your entire life and missed living and enjoying life?

I walked into town and had lunch at Cafe Lotus. I hadn't eaten here yet but noticed the place as it's right next to starbucks, with a beautiful lotus garden separating the two places and a temple directly behind them. It also had a very large crowd the other day which made me think that maybe the food was good. Turns out, it was! 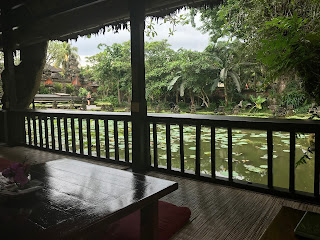 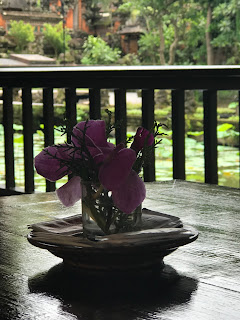 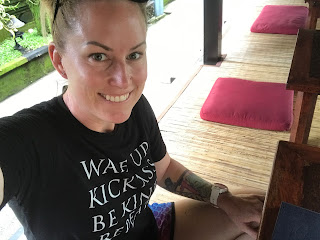 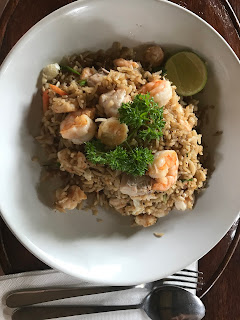 After lunch I figured it was time to try out one of the many gelato places that have been taunting me for well over a week now. It was a hard choice and despite the dragonfruit looking so damn amazing, I went with old faithful, chocolate and mint chocolate chip mixed together. 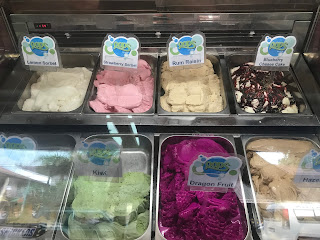 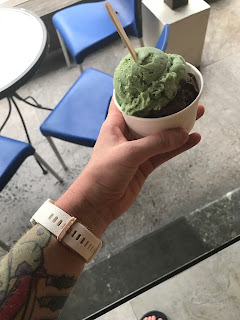 While it's short today was spent taking care of myself, reflecting, and doing some behind the scenes things for some big things to come in 2018. Not quite ready to let the cat out of the bag on it yet, but stay tuned!
Here's the video compilation for the day, enjoy!