Typical morning here in Bali with my delicious breakfast and fruit cut in shapes of perfection. It's the little details that really make a direct shot to my heart. Is that a love language? Perfectly cut fruit shapes? Because it should be.

Soon after breakfast my lovely driver Made (no Nyoman again today) was there to sweep me off on adventures. I don't know how I'm going to exist and function without Made. He's been not only an amazing driver (it's a feat to sustain your life in a car in Bali) but also a super fun human, who has no bullshit been down for some crazy shenanigans, my kind of homie.

First stop on the list was Pura Ulun Danu Beratan Temple at Beratan Lake. This took some time to get there, and lots of driving through the countryside. I have no idea what part of Bali this was in but it was far away, I thought at one point we were driving on the volcano (Made said "no no no volcano" when I asked) we wound up a mountain then back down, until we reached Beratan Lake and the temple. All along the road near the top of the mountain were wild monkeys causing a ruckus with the vendors selling food. They gave zero fucks. I kind of like those monkeys.
The temple was very pretty but also kind of bizarre. It had some weird statues that were very out of place for such a temple, like a giant tiger, random frogs, and even spongebob (wrapped in plastic bags so he didn't get wet).
Upon leaving I had to use the restroom and got all bent out of shape about the 2,000 rupiah fee. I paid it because Made said the drive to the next location was an hour plus, when I finally got back to the car and did the calculation I realized that the fee was approximately fifteen cents. I'm an asshole. 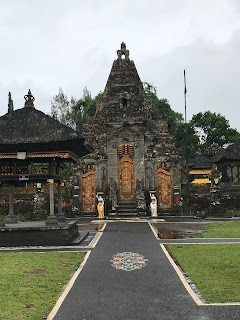 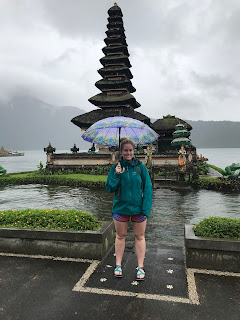 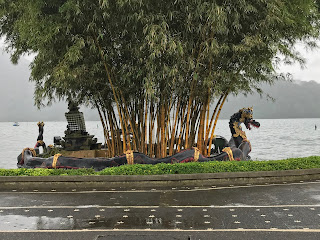 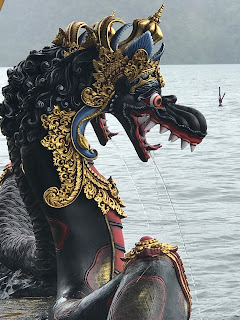 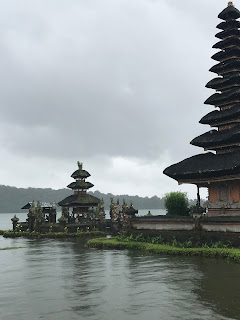 Sekumpul Falls was next on the list. Prior to leaving the villa I asked Made several times, "will I be getting wet at the falls or is it just a hike", no you won't get wet, you don't need a change of clothes, no problem. Got it. I brought none. If I've learned nothing in Bali, I've learned that things are NEVER what you think, you'll always end up soaking wet, and probably smelling like a foot. Today was no different. I've also learned that that is a very small sacrifice for the amount of fun you will have and the capacity something has to change your life. Back to the falls. Upon arriving you are greeted by someone who will then become your guide (because they tell you horror stories about people breaking their backs trying to cross the water and it being dangerous and you need a guide, when that doesn't work they switch to "support the local balinese people, this isn't a lot of money for you" I'll admit it the latter worked more than the broken back) I caved, went for the guide for 100,000 or approximately $7. My guide's name, get this, Made. I should also clarify from my last post about the names that Made is second born (number 2). People in Indonesia are named based on birth order, so Made is the second born, Nyoman is the third born, I forgot the names for the others because honestly I only encounter Made's, but I do know that it goes up to 5, then recycles back to one again!
Made (driver) stayed in the car, he wasn't up for adventuring (or getting soaked) today!
Made (Falls guide) turned out to be an amazing photographer, so well worth the 100,000 rupiah in the end! I should have hired him to come with us for the whole week to make me look amazing (ha!).
The trek to the falls was down slippery moss covered pavement, sometimes it had steps on the side, sometimes motorbikes came and almost hit you, sometimes chickens were crossing the road (no joke to go with this), there were frequent stands with people selling food and other things along the way down. When you got to the top viewpoint it really did take your breath away for a moment, it was stunning. 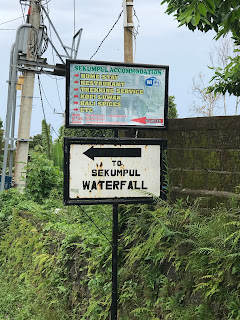 From here it was a long series of metal stairs (that were more like a step and a half each one) down winding around until you hit the bottom. Once at the bottom you came to a big brown river, our lucky day this is the one we had to cross, you know the super dangerous one that people break their backs on. It was probably ankle deep at best and totally manageable. I'm not mad, Made took amazing photos for me along the way, so if the back breaking story, or help a brother out story, is what it took, so be it!
We crossed the river of nasty (which resembled what we were swimming in yesterday), thankfully today with shoes. Wow, what a difference shoes make. Especially now that I have open wounds on my feet! Upon crossing we were right in front of Sekumpul Waterfall. This was a stunning sight to see. The spray from standing pretty far away drenched you. 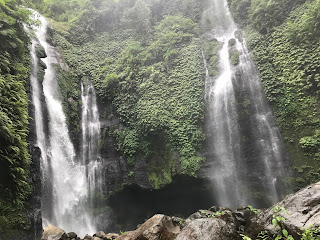 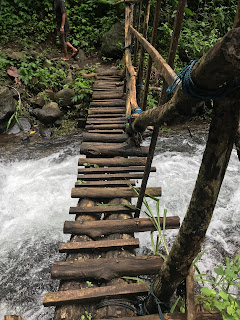 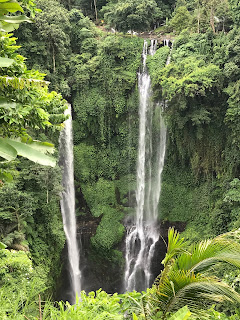 Made asked if this was enough or if I wanted to go on further to see another falls, Fiji Falls...without hesitation I said go on! So glad that I did because Fiji falls turned out to be a triple falls! The hike getting there crossed some very questionable bridges. At any given moment you could look up on the hillside and see little baby falls coming down.
I will say that our guide Made would constantly blow snot rockets and then seconds later be reaching for our hand to try to help us across slippery rocks (I'd do a quick mental assessment of the situation, snot hand, or possibly fall...if I remembered the snot rocket in time I'd choose to grab a rock and not his hand!)
The trek up and out of the falls canyon was ridiculous. All of those steps and slippery pavement coming down, yeah I had to do that coming up, and it seemed way more humid. Made kept trying to get us to stop and take breaks at one of the stands and I just kept walking. I wanted to get back to the car, to the other Made (driver) and to sit down (and be finished, not sit down and still have to hike out!). I remember looking at my Garmin and seeing my heart rate get to 160 something during the hike back up!

Lunch was at a buffet place on the way to the rice terrace. It was called Mentari and probably my least favorite meal yet. I don't tend to like buffets to begin with, and this just wasn't great food. We keep eating at very touristy places. Tried to tell Made today that we want to eat where locals eat, but there was a major communication breakdown.

After lunch it was another long drive to the Jati Luwih the hugo rice terrace. This is such an impressive thing to see and my photos will never do it any justice, even seeing with your eyes is hard to believe. A work of art that is a garden. 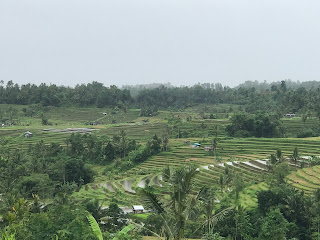 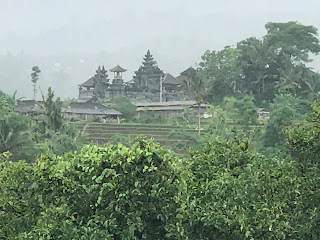 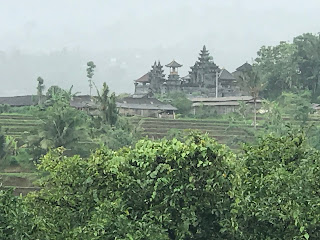 The way back took forever. Driving in Bali is very interesting. A one lane road quickly becomes 4-5 lanes with the cars and motorbikes. Another reason for the excess of traffic today was because today is a big day for marriage in Bali (popular day based on the Balinese calendar, every 210 days with temple, etc), so maybe I'll come home with a souvenir husband (90 day fiance style).
This video was shot through a car window, Made (driver) told us that it was people who had just come from temple, they were walking somewhere else, then would go back to temple, it was really neat, and despite being some crazy traffic, they were parading in the street! He did indicate that this was not a marriage.


Here is my daily compilation of pics and videos. It's been another amazing day in Bali. I have felt love from complete strangers. I've laughed with my whole body. I've experienced happiness from people who have so little but ultimately have so much, and on day 5 in Bali I've learned that it's ok to love yourself a little bit harder sometimes.
I've also learned how to say "thank you" in Indonesian...terima kasih