Bali Day 9: Christmas Eve no place I'd rather be! Lempuyang Temple Trek, Agung Mountain Volcano, Monkeys, Made, and other Bali Shenanigans!

Christmas Eve in Bali. I'd choose nowhere else at this point in my life.

Yesterdays down day was in part because of today, a big trek. I did a little bit of research leading up to this and knew that it would be intense. I read somewhere that it was 1700 steep and uneven steps up to the top of Lempuyang Temple. That you aren't to use foul language or complain about the hike because if you do you won't be afforded the stunning views at the top. Also those who have a sick heart or who are mourning shouldn't make the trek (pilgrimage is actually what they call it) because they will not make it as their heart is heavy and not able to carry them to the top. My heart is very happy and healthy and in a good space, I made sure to really focus my mind before starting the day, and most importantly to focus on controlling my language!

When I convinced Made to do this trek with me (rather than sitting in the car and waiting) he thought that it was 500 steps. I tried to tell him the real number but he laughed and didn't understand, we had a communication breakdown. Today when we had already trekked through some of the earlier temples (before we started the big mountain trek) I broke the news to him and was able to record it all. I say this every single day that I'm here, I'm really going to miss my sweet friend Made. 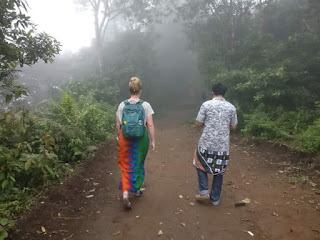 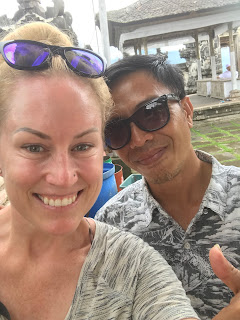 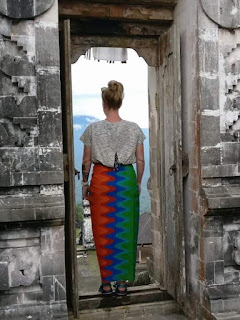 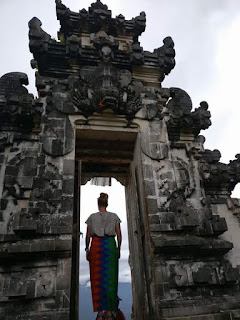 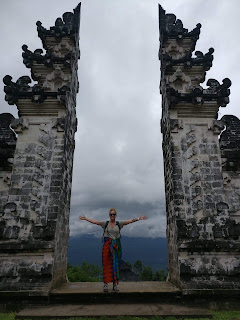 On the drive up to the mountain there was a man walking his pig down the street, we were coming upon him from behind and no shit, this thing was huge and I thought it was a baby elephant. I quickly asked Made what it was, then asked if it was an elephant, he just laughed and said "pig". Then said "you don't have this in America?" No Made, it's not common in America for people to walk their elephant sized pigs down the street!
There are so many Made-isms that I'll remember from this trip, but one I've been trying like hell to capture on video is "so extreme" which started when Made went to Hidden Canyon with me and did that ridiculous river trek (aka don't die in the brown water rapids).

The trek up the mountain to Lempuyang Temple is filled with stunning views. You can see Mt Agung (the very active volcano) on one side and the sea on the other side. Throughout the hike people were coming down (many with large baskets filled with things on their heads) and would greet us with smiles on their faces, wish us well, often shaking our hands and offering encouraging words. Something I'll never forget about Bali is the kindness of people, how happy they are, and the extra large smile plastered across their faces no matter the condition. This has been permanently stamped into my soul. 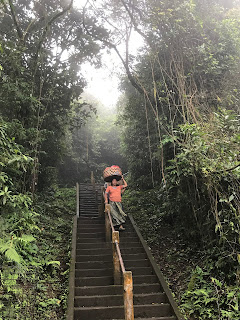 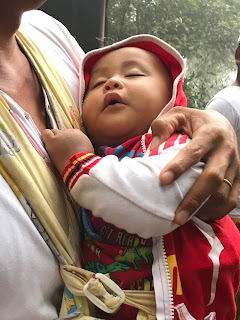 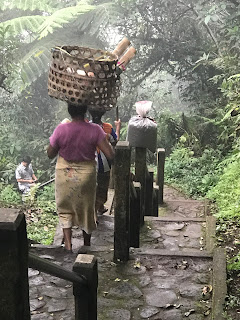 We started to see monkeys as we got closer to the summit. Before I was totally ballsy when it came to the monkeys, I'd walk right up to them, close, stand there, take video. I've suddenly become VERY skittish after having that one jump on my head/back from behind! I got better as we went along, but I will say that the first monkey encounter on the mountain (a big male) I nearly shit myself and definitely hid behind Made who grabbed a palm leaf quickly (since we couldn't find a big stick to shoo them off with if they got too close/aggressive). 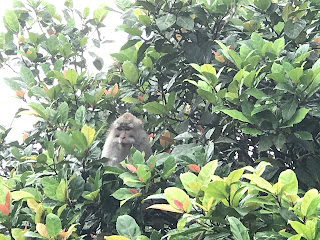 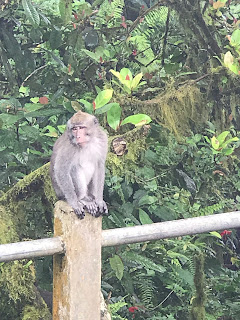 Climbing on uneven concrete, sometimes stones covered in moss (very slippery) steps is hard. Add in a silk/satin sari that is long (to your ankles) and humidity, which then makes said sari stick to your body, and then wrap around your legs starting to trip you with every step that you take, it adds a whole new element to hiking! Needless to stay, within about 5 minutes my sari became a mini skirt.
I started my Garmin at the bottom of the climb, it was about 5.21 miles (bottom to top to bottom) and took just over 4 hours to complete (including stops and many times taking pictures!).

Of course there were selfies the entire way up, here's the collection of those: 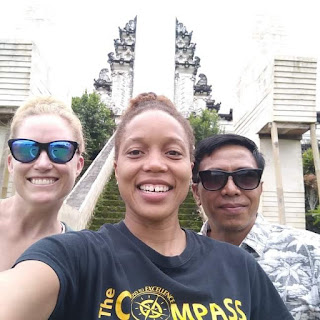 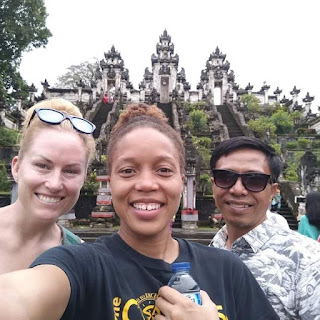 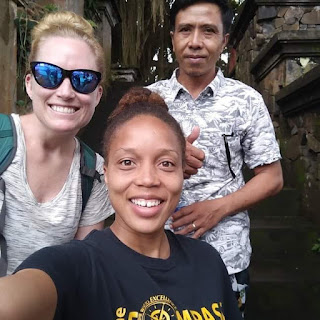 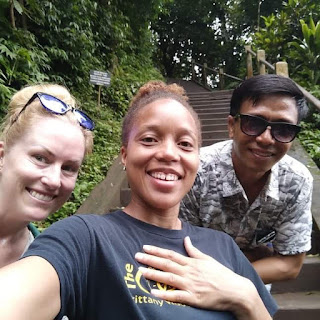 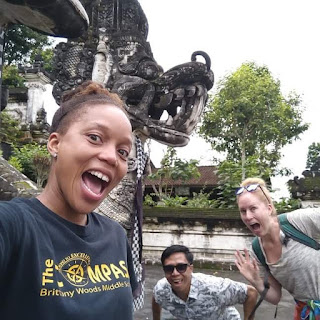 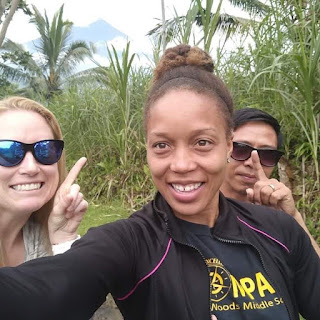 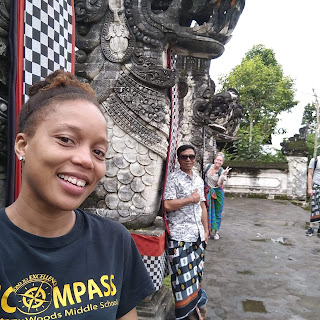 At the top we took traditional prayers/blessings before heading back down. It was funny because during the pray before the one we participated in, the priest was doing the prayer, stopped dead in the middle of it to shoo away monkeys who were helping themselves to the offerings people left on the alter (which often contain food/fruit), it had become an all you can eat buffet for them, they cared very little that they were offerings to the Gods! 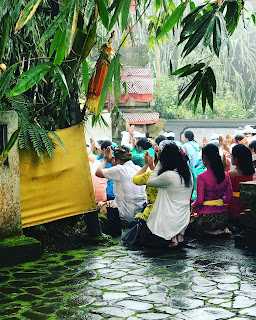 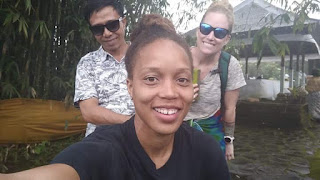 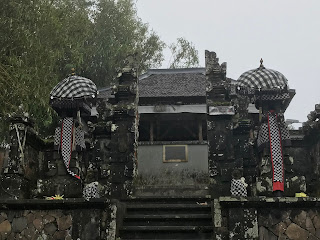 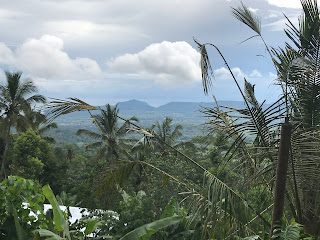 On the way down we stopped at one of the small shacks on the side and ate a delicious bowl of soup called Bakso. I've been begging Made from the beginning to take me somewhere where locals eat, and for him to join me for lunch. He has done neither. I guess today he had no choice since we were at 3,000 feet together with pretty limited food choices. The soup had glass noodles, meatballs made from chicken, veggies, and then they put spices on it (traditional Balinese, spicy and something else) it was absolutely delicious, and 10,000 rupiah or approximately .73 cents. No lie! I've been paying 10 times that for meals that were not even half as good! 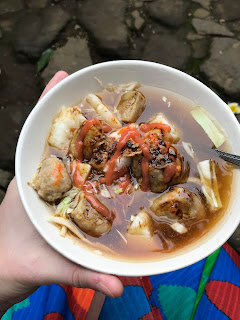 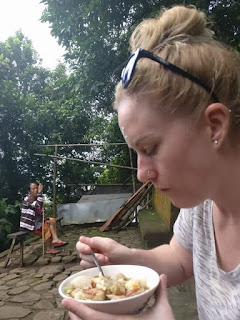 The way down was so much easier than the way up, and went so much quicker!

After trekking for hours we were off to the Bali Chocolate (I actually thought it was a chocolate factory, cue Willy Wonka dreams in my head). I was more than disappointed when we pulled up to a hut on the sea only to be hit with an entry fee (nominal) to then be given 3 samples of varying products then hammered with sales attempts. That's it. Honestly the best part about Bali Chocolate is the massive swings that they have facing the ocean. A quick swing on those takes you back to about 6 years old. I definitely left Bali Chocolate feeling like I needed to stop at a mini mart to pick up something to satisfy my now chocolate craving.

Highlight of the day is definitely the Lempuyang trek with Made and the encounters along the trail with sweet humans. I hope you enjoy the video compilation of today's adventure! I could not think of a better way to spend Christmas Eve.