Today started off like any other day in Bali, breakfast cooked for me. I'm seriously never leaving. The key to my heart is directly correlated with food! Today Nyoman had to take his car for repairs so it was just Made (he's been the driver the entire time I've been in Bali). Made doesn't speak a lot of English, but he tries, and is super nice. Made and Nyoman bring fruits every single day to try, then some for snacks later in the day. The fruit to try today was this pictured below (later to be determined through some broken communication back and forth and some googling to be Salak, Balinese snake fruit). It's delicious and tastes to me like many different things. I made a video (before the death of my GoPro in the canyon) on my first impressions. 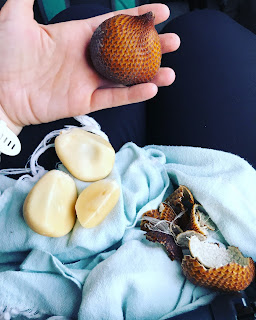 First stop for the day was the Hidden Canyon (also referred to from google searches as the Sacred Canyon of Sukawati, but the sign said Hidden Canyon Neji Guwang when we arrived).
Here was the expectation: We would drive there, walk around the grounds, and view some caves and canyons and be on our way.

Then there was reality. We pull up, walk to pay for our ticket, immediately after paying I'm told that I'll get wet up to at least boob level. Come again?!
Here's the thing. I got up this morning, felt like I wanted to not look homeless, and put some effort into my outfit, I was really kind of feeling it, and feeling clean and, well I was actually wearing underwear and not a bathing suit for the first time in 3 days. The universe has a hilarious sense of humor.
Ok so I'll be getting wet. I figured it would be a quick one and done shot. I could handle this.
At any rate I figured I had better use the restroom before we started out in the event that it would be longer than 20 minutes I wouldn't have to pee in the water! The bathroom was...rustic...that's being generous. I'm accustomed to squatty potties. The door didn't fasten, I got spiderwebs in my hair when assuming the position, and I slipped my foot on someone else's careless pee (because they clearly didn't get low enough) and almost had an incident of my own in there before I could even use the "toilet" myself.
want to see a rustic bathroom? Check it out. If you've traveled to a developing country this shit isn't new to you. If you've never escaped the US (I'm sorry) this might horrify you. 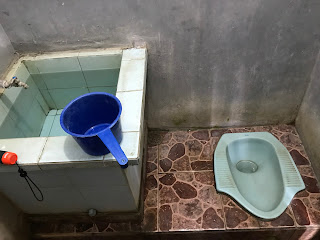 This should have been my first sign of things to come, but honestly I didn't even pay much attention to it, I was just happy to have access to a free (yes often times you have to PAY to use the toilet in Bali, some signs even have different prices for what you're using it for!) toilet! This place was closed yesterday because the waters were too dangerous (rainy season) but apparently it's ok today (there's an emoji to express what my face looked like when I heard this). So We begin down a set of stairs, Made decided to join as he hasn't been here before, and it was better than sitting in the car! At the bottom of the stairs is a riverbed, at this point the guide, also named Made (Made in Bali means "2") indicated that we would need to take our shoes off. I begged to keep mine, I hate walking in water without shoes on. I had my chacos and was fully confident that I'd be safer with them on than off but he insisted. And persisted...even more than me. SO he won. Reluctantly I handed over my shoes (and unbeknownst to me, the skin from the bottom of my feet as a result!). I was promised my shoes back after we crossed the water, that was a lie, that never happened! I'm not sure at what point this became a good idea, hiking/trekking with no shoes, on volcanic rock. I protested it for hours, until I finally gave in. I have a gash on the bottom of my foot, that wouldn't be there had I had my Chacos. I also am missing a large piece of skin from the bottom of the other foot, again, had I had my shoes, no issue. Balinese people must have elephant skin on the bottom of their feet, I felt like I was walking on glass half of the time and the Made's were not even flinching!

The safety of this adventure was questionable at best. I fell off of a rock ledge because of how slippery it was. I don't even know what it looked like going down but I know that I hit a part of my leg, my foot, and bot of my hands and my ass. I have bruises, scrapes, and part of a toenail is missing. A cute little heart bruise on the heel of my hand is a reminder of this adventure! This trek was at least 2 hours. It was intense. Made (river guide) would frequently describe the water in terms of "strong", "STRONG", and "VERY strong". At one point during "very strong" I was gripping the rocks, while the bottom half of my body was being taken downstream (as were my pants) and Made (river guide) was telling me to jump in (to the middle of that shit where it was probably very very strong) and swim across. And I freaking did. I do some dumb shit, and for some reason this one didn't set off the radar that says "hmmm this might not be a great idea". 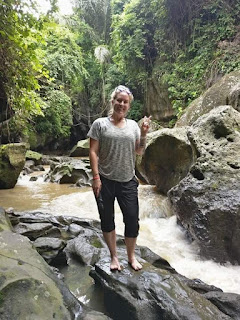 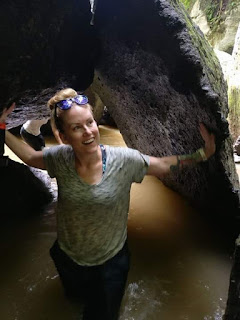 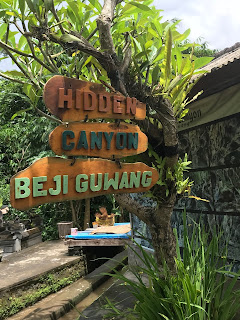 Throughout the trek Made (river guide) made sure to have plenty of "selfie"opportunities. "you want a selfie" was frequently said by him. But what he often meant was do you want an "usie"?! Because he wanted to be in the pictures! It was hilarious, always took staging, frequently required that I stand longer on volcanic rocks (with my no shoes) than I wanted to, but no doubt brought a chuckle for one reason or another. 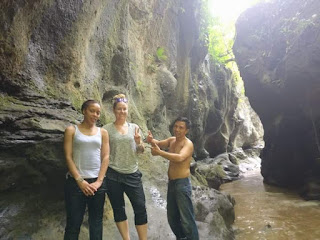 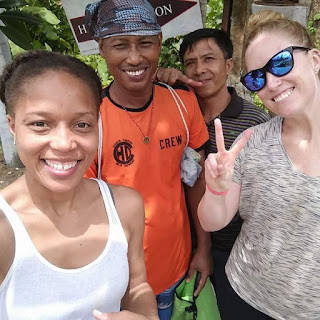 This trek had 3 different massive canyons separated by lots of river trekking. The third and final canyon had a big rope that was super fun to swing on. We all gave it a try and embraced our inner Tarzan, or in my case Miley Cyrus (don't judge you know all of the words to Wrecking Ball too!) 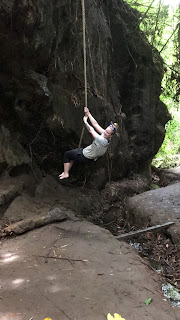 This canyon adventure was absolutely NOTHING I would have chosen to do had I known the extent of it all. But in the end I'm so glad that I got the experience,  because it was nothing short of amazing. I got to see some really stunning (not tainted by millions of tourists) things, nature is pretty darn amazing.

Fun fact, the video I posted to my Insta stories where my finger is pointing toward a "mountain", yeah that was the volcano that just erupted...it was that close to where I was. It actually looked super close but even then it was still about 3 hours away according to Made (river guide).

After the canyon adventure we were soaked...and freezing, so of course it started to rain. And it essentially did not stop all day long. Mother Nature has a sense of humor. We were freezing, and of course didn't bring a change of clothes because we didn't realize that we would be swimming in filth water for hours. Next stop was a long ways away...so a good hour plus in the car in wet clothes before we arrived at the Tanah Lot Temple (this is a very famous temple on the sea)

I would imagine that this would be really stunning to see during nice weather. It wasn't nice weather when I was there, the seas were violent, and it was raining, and I was soaked. While still quite gorgeous, you could tell it would only be amplified with a little sunshine and a little less rain! 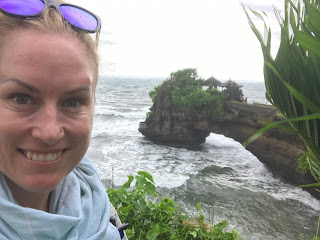 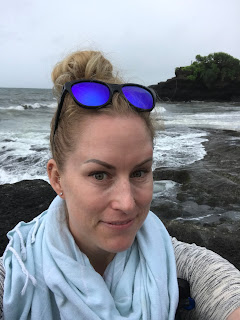 On the way home from the days adventures Made (driver) asked if we minded if he stopped to use the "public restroom"
Of course not!
So he pulled over and pissed in a rice field on the side of the road! I wonder where women go for public restrooms, especially if they are on their period since they can't go anywhere in Bali on their period!

Here is the video summary of today: