This morning started off with another delicious breakfast, not going to lie, it's kind of wonderful having someone prepare breakfast for me. I could probably get used to this. In addition Nyoman brought some delicious "cookies" that were more like puff pastries with some sort of filling that he described as sugar and pineapple. It was sort of like a thick jelly and was very tasty! 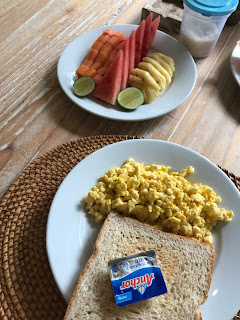 After breakfast it was time to start the day's adventures. First stop was Mt Batur. This is a UNESCO World Heritage site (which I actually didn't even realize until I saw it on a sign on the way there. I also didn't realize that the volcano had erupted pretty recently. 2000 something, I can't remember the year that Nyoman said, but there are very visible signs of it on the landscape, clear markings of where the lava flowed. He also indicated that many people trek this volcano to catch the sunrise. At first I was like, yeah don't put me down for that, then after thinking for a few minutes, I actually started to consider it, maybe I will? He said it takes between 2 and 3 hours to get from the bottom to the top and many people start around 2 am to be certain they are at the top for sunrise. 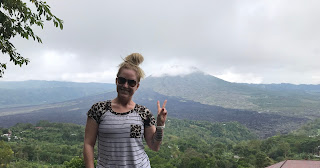 After Mt Batur (but in the same area) I was able to go to a natural healing hot spring. This hot spring is fed from the waters heated by the volcano. I'm not certain what healing properties this hot spring has, but it claims to have some. We shall see. It was stunningly beautiful and had a picture perfect view of the mountain and the traditional Balinese village that Nyoman was talking about on the other side. In this village they do not cremate or bury the dead, when the person passes away, they are simply left where they died. I know what you're thinking because I was thinking it too! I had a million questions about this and only asked a few as I didn't want to offend. 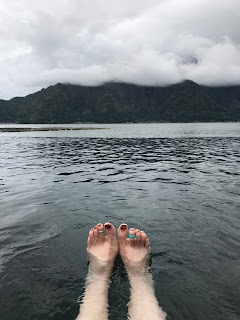 After the hot spring it was time to head to the Holy Spring Temple. I didn't know what to expect from this but I was thrilled to be able to participate in a blessing at the temple. Nyoman indicated that he would bring a sarong for me to wear and that I would get wet during the process of the blessing, but I had no idea what to expect and in all honesty, I thought maybe a splash of water on the head/face and call it a day. I was way off!
The Holy Spring Temple was amazing and an experience I'll never forget. There are a series of fountains that you receive blessings at. 2 you skip unless you are attending a funeral service and in that case you collect the water (holy water) for the service. You clasp your hands in prayer at your forehead, ask for your blessings, then dunk your head under the holy water, bring it up, then drink the holy water. You do this down the line for all of the fountains.
I really tried to clear my mind each and every time, making conscious choices and offering good use of my blessings. By the last fountain I really did feel very clear. 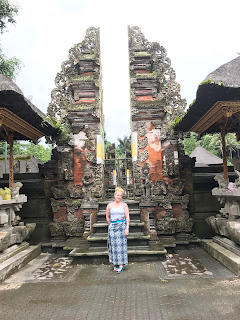 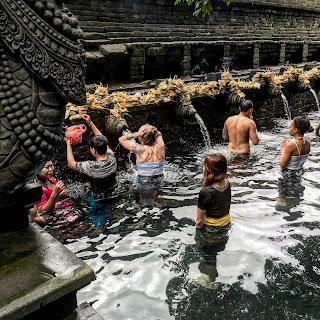 The water was absolutely freezing, there were giant fish swimming around in there, but it also was a good test of your ability to calm your mind. To not focus on anything. On how you were freezing cold, on the fact that that was a big ass fish brushing up on your leg, on the many people around you, on the smells, colors, sights in your peripheral vision, on how uncomfortable you may have been in your own skin at that moment, just turning that volume down and being present and in it's most simplest form, asking for some blessings and cleansing your head with holy water. Nothing I say or write will do this process justice, and I understand that not everyone will get the opportunity to experience this, but I urge you to do it if given the chance, don't eliminate this one from the list.

After the Holy Spring Temple it was time to eat some food! Lunch was delicious, but so small! I felt like I could have eaten 3 portions of my meal! 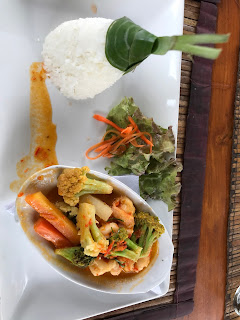 Following lunch at the warung it was time for some more temples. First was Gonung Kawi Temple. This was a very beautiful place with many stairs (over 280, but we didn't realize or count until we were coming back up, poor Nyoman said his legs were "sick" after climbing!)
Well worth the climbs though, this temple was all carved by hand, and has many rocks within the water/stream that were put there from the volcano that erupted approx. 50 years ago (the big one that is currently erupting). 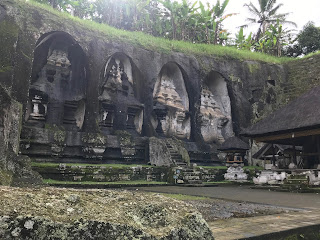 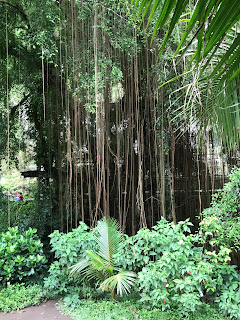 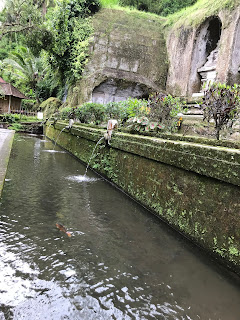 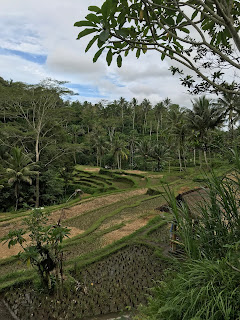 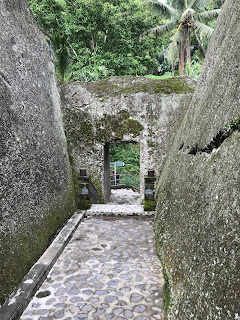 Following the Gonung Kawi Temple we went to the Goa Gajah Temple. This one had far less stairs (and far more people/tourists) so if you're looking for a really awesome temple experience with way less tourists, I highly suggest Gonung Kawi Temple!
Goa Gajah Temple had a giant carved cave at the bottom with faces, one giant face/mouth that you could enter that brought you to a bigger room, Nyoman said that people used to go into that cave and do yoga. When we finally entered I could tell that it was Bikram yoga they must have done, it was sweltering in there. There are several alters within the cave, one representing the 3 gods, the creator, the protector, and the destroyer, one with Ganesh, and another one that appeared empty. 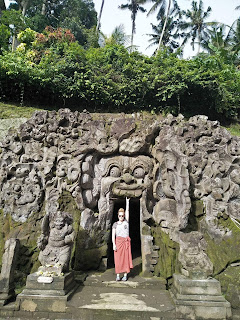 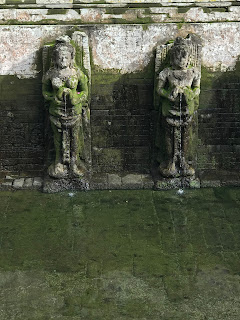 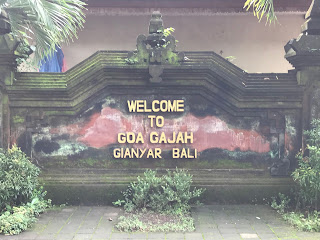 This has been another really fantastic Bali day. The Holy Spring Temple being the main highlight for me. It was nice to really just disconnect, and reconnect. Disconnect some things that have been wearing on me, and reconnect and focus on the positivity and the blessings. Sometimes you just need a reminder.

As I have been doing with the rest of the trip, I made a video of most of my photos/videos that I took and put them all together! Enjoy!