Bali Day 12: Pedicure, Still Trying to Figure out This Rupiah, Haggling, and That 5.5 Mile Walk!

Woke up for breakfast and guess who is starting to really warm up to me...Olek! In addition to being pretty playful, he decided to sit down under the table at my feet and when Ogie called for him to leave he refused to move! 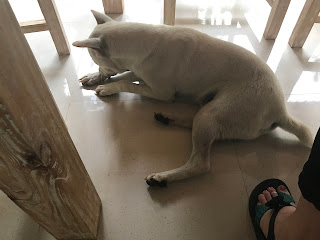 No plans for today, which is kind of nice after such a packed and busy first week and a half here in Bali. I had sort of just intended to walk into town, maybe stop at a coffee shop (that never happened) and then get a pedicure and keep walking around and just do whatever.

I walked into town and stopped at a shop that had beautiful fabrics in the window. There was a sweet older woman in the shop, probably 2 feet shorter than me. Nannook was her name. She was so helpful and obviously wanted me to buy something. I initially wasn't going to buy anything in Bali, but after wearing Sarongs for the majority of the trip I thought maybe a pretty sarong (that I could convert into a scarf) would be a neat thing to take back. Nannook then started showing me the beautiful bed covers (hand woven like the sarongs) that she had as well so I was roped into one of those and from a whopping less than $30 I walked out of her store with both. But not  before getting a picture with this sweet woman who also left me with a bit of a prophecy "when you come back to Bali, you come see me again". I had said nothing to her about a return trip. I assured her that I would most certainly come to see her again. 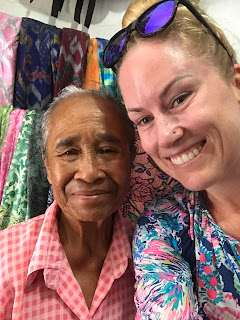 The pedicure did happen and I will say that it was perhaps the best massage portion of a pedicure that I've ever gotten. The pedicure cost me $4. No lie. Granted the polish was nothing compared to Okinawa pedicures, but the massage was way better. I'll take it! It certainly made my feet look a whole lot better after the abuse they took in Hidden Canyon! 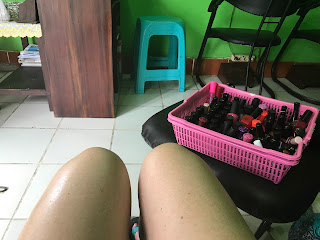 After the pedicure I kept walking along and decided that I'd go to the market (Art Market) in search of something for my nephew. I was thinking of one of the hand carved wooden toys and perhaps some elephant pants. I only half succeeded in that mission as I couldn't find a good wooden toy. Hopefully the elephant pants will be the correct size and not elephant sort of shorts! 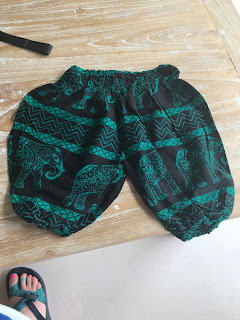 Lunch landed me back at Oops, thinking I'd get some AC, a decent bathroom and some Wifi. Joke was on me because the power was out, so all of those things were basically dysfunctional.
Bathroom had no lights (that made using it very interesting), no AC or Wifi because of no power, and where they sat me had an infestation of ants that decided to much on me and part of my lunch. I ate fast (what the ants hadn't touched) and got the heck out of there (and back out into the heat/sun). 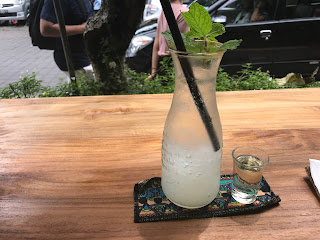 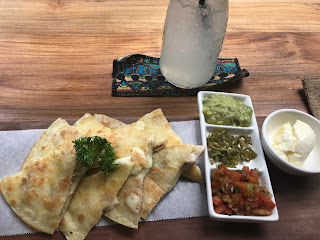 By this time it was really heating up and I still had quite the walk back, all I could think of was how badly I just wanted to be in the pool to cool off, so I decided to start the trek back! I had actually remembered to start my Garmin this time and it read 3 miles before I started my journey back to the villa. Wow, way further than I thought (granted that included walking around the market too). Upon return to the villa it hit 5.5 miles. I'm not sure how far I thought the walk into town (and back) was but I definitely didn't think it was in the 5 mile range!

No sooner than the gate was shut was I in the pool. Spent most of the afternoon there! 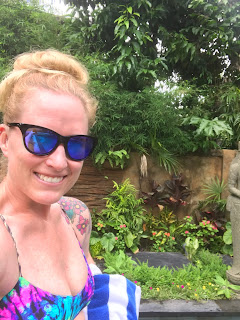 I walked down to Cafe Vespas for an early dinner. I didn't sleep well last night so I plan to go to bed super early tonight. Another full day in the books with Made tomorrow, even if it doesn't include climbing Mt Batur. I'm still going to work on him though. If I can't climb it with him tomorrow I'll try for the next day. I'm persistent so maybe I can wear him down!

Here's another short collection of my pics/videos from the day! Will have many more from tomorrow I assure you, including Made, I know some of you have grown to love him just as I do!