Today started off with a delicious breakfast cooked by the staff at my villa. I'm never leaving. I have someone who cooks me breakfast. I can also say things like "I live in a villa", so why would I leave?!
I'm not going to lie, they could have served me meatloaf for breakfast and I would have eaten it with a smile after missing dinner last night thanks to my very extended nap (whoops!) 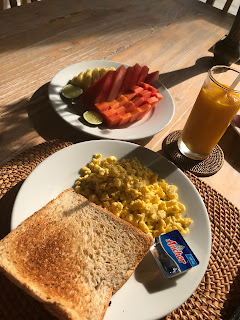 After breakfast if was off to adventure. First stop was the Ubud Art Market. We stopped there early before all of the vendors were set up (and before all of the tourists got there). This also meant that I got the opportunity to see women bringing offerings to the temple. Nyoman told me that every 6 months (or 210 days) based on the Balinese calendar they do this type of offering at the temple. The offerings were very elaborate and contained mostly food. Women carried them on their heads, some in devices that looked like giant vases. It was absolutely beautiful.

After the Ubud Art Market it was off to the Ubud Swing. I won't lie this terrified me as I'm scared of heights, but not scared enough to not do it. Prior to getting to the swing you walk through a coffee section and they teach you about this special type of coffee that they make. I thought I misunderstood when they were describing because what I heard sounded like they were making coffee from animal shit. Nope I heard right, this animal, the Luwak, part of the mongoose family, eats only the red coffee beans, then craps them out, then they pick through the feces, roast them, grind them in a pestle and mortar, and you have your expensive coffee. Animal shit coffee. Seriously, people are making money on this. And yes people are actually sorting through animal shit to make coffee! 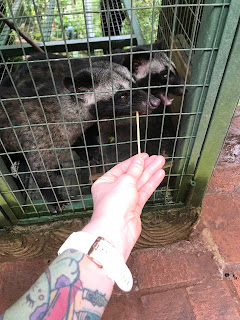 It smelled good (the finished product). Once I had sampled all of the teas and coffees (minus the feces one) it was time for the swing. This was terrifying but also an amazing experience, when else can you be hundreds of feet above a rice field, in Indonesia, scaring the shit out of yourself?! Check that one off of the bucket list. 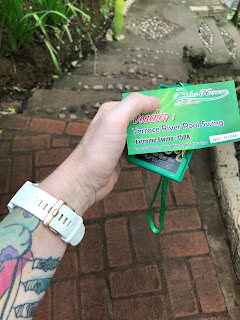 After the Ubud Swing it was off to the Tegalalang Rice Terrace. Unfortunately there was no rice as it had just been harvested, but it was still a stunning sight none the less. This massive canyon of rice terraces along side a busy road, really and truly a thing of beauty. 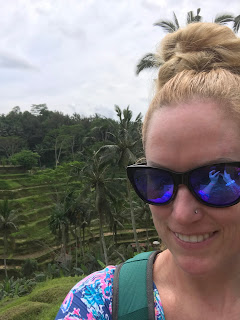 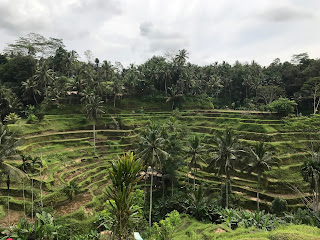 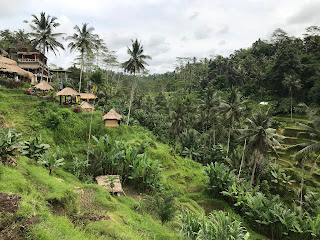 After the rice terraces was the long awaited Ubud Monkey Forest. I have seen pictures, heard stories, and honestly I was really looking forward to going. I love animals, hate them in captivity, and loved the fact that this was totally free range animals and I could just walk through and quasi interact with them, but that they also weren't drugged or contained in any way. The monkey forest didn't disappoint. Some people are ridiculous in there and probably should be drugged or confined. I mean really, parents just letting monkeys crawl on their children and bite them for pictures and thinking it's cute, it's not cute it's how you get sick/disease. You can have a really great/fun experience there but it's also not smart to let a wild animal bite you. But I'm no doctor. At one point I had to smack my phone on my hand to make a loud noise because a young child had a monkey on her back, biting her, and her mother was doing nothing but laughing and trying to get a picture, no bitch that monkey is biting your kid.
Moving on. I had a great time in there, there is a lot to see/explore, stay away from the fighting/territorial monkeys you want no part of that. The mamas carrying their baby monkeys on their bellies are adorable, and you might find yourself with a little monkey hitchhiker while walking, if it gets a wee aggressive, make a loud noise, smack a sandal on your hand, that scares them off! 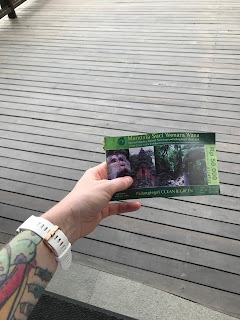 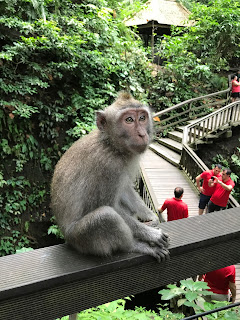 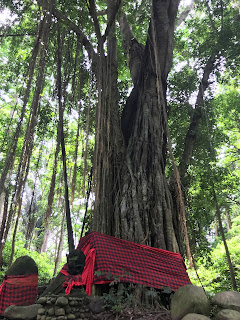 Final stop of adventuring for the day was the Tegenungan Waterfall. Unfortunately because it's rainy season I didn't have the opportunity to swim here (also what is causing the water to be brown at the moment) but it was still great to see.
Here's what they don't tell you at the top before you climb down the stairs...it's 165 stairs down...which means it's 165 stair back up too! At the bottom there's a nice sign telling you that! There is a mini falls part of the way down and to the left that is equally as beautiful but not as much water. 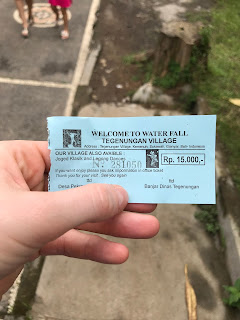 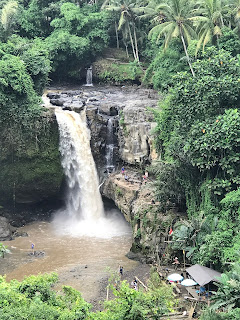 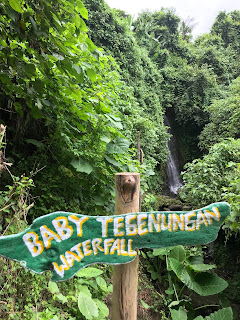 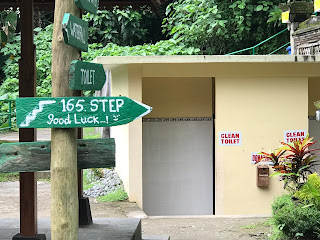 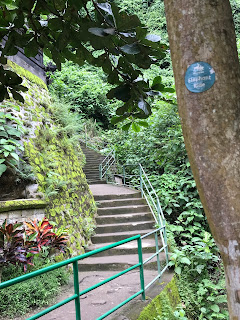 Lunch time, finally! Lunch was at a restaurant called Warung Dewa Malen. I had a traditional Balinese dish that was essentially fried rice, with a fried egg on top, with 2 skewers of chicken satay. Very tasty! When you walked into the restaurant they greeted you with an orchid and put it behind your ear, so sweet. Until I realized that bitch had ants in it and they were crawling on my head. I've been itching ever since. 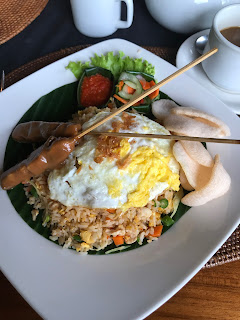 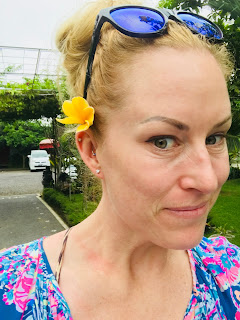 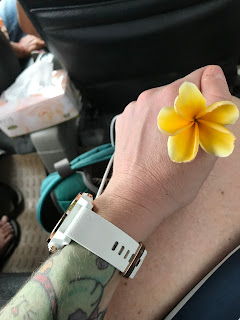 Today was nothing short of amazing. Seriously sometimes I have to pinch myself. All of these moments remind me just how awesome life is, how lucky I am, how each and every bump, curve, turn and break in the road leads you to the exact place that you are meant to be. This is the Bali that I knew existed in my heart. Here is a video recap of all of my pics and videos that I took today...enjoy!