Dinner at the Onsen

This definitely gets its own post. Dinner. I’m pretty much speechless as a result of my dinner experience. Let’s start from the beginning. Dinner was included with the cost of the room/trip. We walk down to the dining room in our rugged clothing and sandals (and it was clearly a dressier dining room than we packed for). Upon sitting down the waiter (well, one of the 6 waiters who tended to us throughout the dinner) started to speak to us in Japanese, like we could actually understand him, when I asked for an English menu, he thought I was asking about a particular drink…you get the picture…and this was just the first 5 minutes. He handed us a menu that was a small piece of paper and was entirely in Kanji. I have no idea if it was a menu for dinner, drinks, or happy ending services offered by the girls on the street. After we clearly were not making any moves or picking anything they just started bringing dishes. I lost count of the “courses” that we had but there were some dishes that stuck out that I will describe to you. One of the first ones that was brought to us was this small dish with two pieces of broccoli in it and lots of baby shrimps all over it (not much bigger than my thumb nail). There was a strange dressing (?) that it was all sitting in. After the first bite I realized that these baby shrimps (which were whole I might add…yes head included) had their little baby shells too. That should be good for digestion.
They brought out a plate full of raw fish items (this was the best part of the meal). I’m pretty sure one of the waiters was trying to correct my wasabi use, but he was speaking to me in Japanese and I was speaking to him in English and we clearly had not found a middle ground. I was at this point pretty frustrated and stressed with the whole meal/experience and certainly didn’t want him telling me how to “consume” my raw fish. I was tempted to take my wasabi laden chopstick to his left eye, but figured that would be bad for foreign relations.
Next item on the menu that was “interesting” was at least the 3rd or 4th course…rice with toppings. When I took a bit that had a small bit of the “toppings” on it it tasted (and looked) like bacos (bacon bits).
Now, I’m saving the best part for last…this apparently was an interactive dinner. After our first course plates were put down a guy in a tuxedo got on stage and started speaking in Japanese. When people clapped I clapped, for what, I have no idea! All of a sudden out comes a woman in a gown and a guy all dolled up looking like the guy from La Bamba. I instantly felt like I was on a Carnival Cruise. And what song did they sing you might ask? Something traditional? Something ethnic? Oh it was ethnic alright; they sang, in English, “A Whole New World” from Aladdin. They sang a few other songs in English and then two in Japanese. Throughout this ordeal they came out into the “audience” (dining area) and “interacted” with fans/diners. The man even got an older Japanese woman up to dance with him for a few spins. At this point I was praying to the holy Santa Clause that this would end and quickly. The woman changed dresses and hairstyles three times throughout the dinner.
This whole dinner/onsen experience made me want to pack my bags and go home to “comfort”, possibly with my security blanket (night night) in hand and a thumb in my mouth!
The highlight by far was coming back to our room that had been made up by the chambermaid (that’s what they are called, our instruction binder that accompanied the room said so!) This Ryokan traditional Japanese room business is pretty neat! 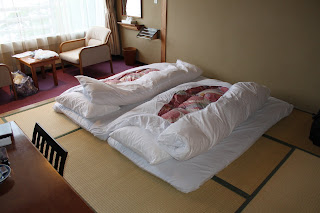