This morning we got up at an offensive hour (leaving the hotel before 5 am, like I said, offensive) to go to the Tsukiji Fish Market. This is the central fish market in Japan and if you get there at 5am (before the trains start running (and no we did not get there by 5am) you can catch the Tuna auction. Fisherman/women from all over the world sell their catch over here (a couple of large tuna can sustain a person financially for the year. Many of the fish bring in close to a million dollars). 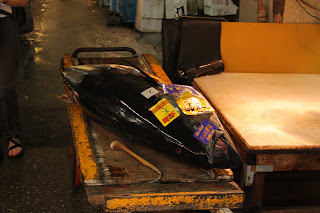 I wore my flip flops (because it's hot and humid and why would I want to put on sneakers?!), I quickly learned that that was not a smart decision when walking around a fish market (with water, blood, guts, fish, parts, etc all over the floor). I hope I don't get some kind of Japanese fish disease as a result (do they exist?!)
The fish market was interesting, but there is little in life that is worth getting up and leaving before 5am...

When we got back to Shinjuju we tried to go to the 100 yen store but seeing as it was really freaking early still, nothing was open. So we hopped back on the train and headed back out for a day of shopping in Asakusa (reference Dynamic Tokyo Tour for previous excursion). Since we had about 5 minutes the first time, we decided that to fully experience the shopping potential, we would need to go back. We gave new meaning to shop till you drop! 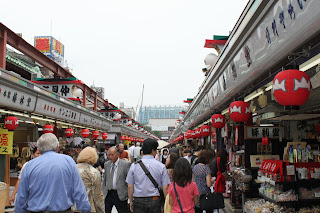 After that it was back to Shinjuku to drop off our belongings, labels some items (who gets what, what the hell is this thing that I bought, you know the routine), crack open a wine (in a dixie cup) and put our feet up for a minute. After all, today was a beautiful, balmy, hotter than hell 85 degree day with a million percent humidity. You know the kind, where your clothing is drenched with sweat in a matter of minutes and you're ready to rip someone's eyes out...oh, maybe thats just me. I hope you are all nice and cool and humidity-less!

Oh and let it be known that wine in a dixie cup is fantastic!

Let me also state for the record that I HATE the Shinjuku train station. This will get a separate posting at some point but right now I can't bring myself to write one without it being littered with expletives!