Today got up bright and early (5:30am I thank you very much) to go on the Dynamic Tokyo Tour. We had to walk to another hotel to meet the tour group/bus to then be transported to a bus station to get on a different bus. This was a great way to see the city because 1. I didn't have to walk and 2. because someone was telling me what everything was!

First stop was the Tokyo Tower. The tower is used for news and media and is approximately 330 meters high. We went to the observation deck which was about half way up (plenty for me thank you!) 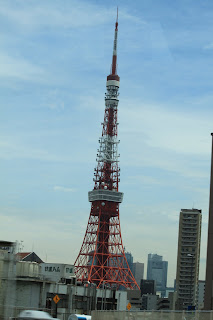 Second stop was the Happoen Garden for a traditional Japanese tea ceremony. There were several weddings going on at this garden (17 to be exact on this particular day).
Next we had a traditional Japanese style barbecue lunch that was to die for. It was cooked in front of us on a stone (rubber stone from Mt Fuji).
Fourth we went on a river cruise on the Sumida River to Asakusa (which is a fantastic shopping area in Tokyo for traditional Japanese items). This was the last stop on our tour, we were brought back to the bus station, transferred to a different bus, and then brought to the hotels in which we were picked up.
There were some interesting language blunders throughout the day (no I did not use profanity in front of small children)...The tour guide kept talking about the 2 sides of the street, but with his accent it sounded like he was saying "Two thighs". Later in the evening when mom and I went to dinner at an Indian Restaurant, I was asking the waiter what a specific kind of nan was, I said "what is it?" and he just kept repeating after me like a parrot "what is it?"

A casual stop in a 7-11 turned out to be rewarding in my hunt for the ultimate Kit Kat collection. I found a fantastic assorted bag of treats that contained 12 Kit Kats, 4 of each flavor: plain (how boring, who does that?!), blueberry, and strawberry.
On our way back to the hotel we were walking down the street and saw tons of people (even piling into the road where the cars were trying to drive), we then noticed that the TV in the window of one of the buildings was playing the soccer game (Japan is playing of course). Everyone was out in the street, drinking, cheering, blocking the road, and all in all having a good time. We of course had to participate! Best of all was the beer guy that we spotted!

He had cups in a side pouch and this keg cooker backpack. It was fantastic!

It has been 15 1/2 hours since we left the hotel this morning. We are back, exhausted, and enjoying the rest of the soccer game with frosty cool beverages in hand!