Again, not a wonderful day here in Japan, it has been raining off and on, seems like it's more "on" when we have to walk outside, but hey, I'm not going to let a little rain get me down right?!

After checking in (to our upgraded room) we ventured out to the Peace Memorial here in Hiroshima. It's absolutely fantastic and my pictures I'm sure won't do it justice. There is a flame burning in the middle of the park to memorialize the lives lost, and when you stand in front of it and look through the archway you can see the Genbaku Domu (which was right around ground zero in WWII).

Throughout the park there are shrines and memorials covered in paper cranes as a sign of peace. There is also a monument to Sasaki Sadako who was 2 years old when the Atomic bomb was dropped, she had leukemia and then died when she was 12. She believed that if she folded 1000 paper cranes that she would be cured. She completed the first batch and wasn't cured so she started a second batch before passing away. Since then others have continued making paper cranes in her honor. 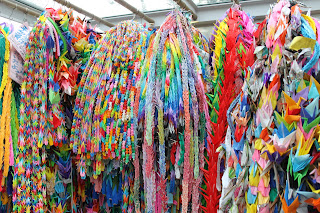 The paper cranes are beyond amazing. These are chains and chains of paper cranes at the memorial for Sasaki Sadako.
After the Peace Memorial we went to Hondori Street which is a fantastic street for shopping. Ahh Shopping! I found the most amazing purse ever, the perfect souvenir from Japan! We then decided that we should refuel our tanks before further shopping (food tanks not money tanks) so we stopped at a little Italian Restaurant for some pizza and wine. Too much wine.
No English menu so we pointed to pictures for what we ordered. I went on the safe side and got the Margarita Pizza (at least that's what the picture depicted). Mom on the other hand was living on the edge and ordered the shrimp, avocado, and some sort of drizzle over the top (my guesses are butter or mayonnaise...after eating it we still aren't sure but I will say that it was pretty good!). The tables have these little things that look like storage cases for toothpicks. We couldn't figure out what it was so I convinced mom to press it...oops, it's like a doorbell for the wait staff. We quickly had a waiter at our table to tend to us. Thankfully I have cat-like reflexes (even after half of a large carafe of wine) and asked if we could get a to go container for our remaining pizza slices. Good save! We laughed so hard we had tears in our eyes. That's pretty typical of me though, convince someone else to do something (like when I convinced my brother to pick up a wild mole outside and he got bit by the thing. Sorry Owen!) 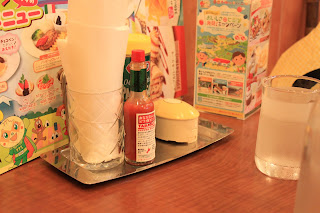 We then proceeded to drunk/buzzed shop. At this point everything is a great deal, a great idea, and a must have, even things that possibly would have been considered ridiculous before the carafe (large size) of wine!
We did so much shopping that we had to buy this little padded handle velcro things that go on the handle/s of shopping bags so the bags don't cut into your hands (yes this happens when you buy TOO much!).
We went to this fantastic store called Tokyo Hands, highly recommend it for anyone going to Japan. I've seen them in Tokyo, Kyoto, and here in Hiroshima. They sell anything and everything you have ever wanted, and anything and everything you have ever wanted but just didn't know it yet!
Hiroshima Japan 2010 Shopping