Today we started early...mainly because we had a surprise visit from the sunshine and figured that we had better make the most of that time, as the forecast for the next days (including today) stands consistent at rain/thunderstorms...EVERY day! Today was no exception to that but at least it held off until after lunch time so we could get some pictures of our morning adventures!

We went to the Hiroshima Castle, part of which we could walk through (of course by removing our shoes...customary here in many places in Japan). There was a shrine within the castle grounds, and somewhere there is a tree that survived the atomic bomb, we couldn't find that tree per se, but we did see a lot of trees (I tried to convince mom to take a picture of one of the many trees to pass it off as the "survivor tree"...she would not)

After the Hiroshima Castle (properly called Hiroshima-jo, but since when do I do anything properly?!) we ventured out to the Shukkei-en (Shukkei Garden). This was a huge and beautiful Japanese garden. It did however have a crab infestation. Yes you read correctly. Crabs. Little crabs running all over the paths, etc. I have seen crabs before on the beach, but never expected to see them in a Japanese Garden. When I was walking down the path in this homage to zen I said something un-zen like because the little creature horrified and shocked me! 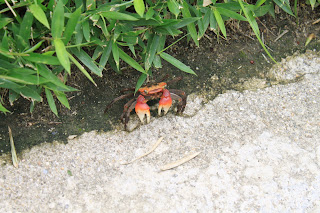 I'm pretty sure it could have take off a toe or two with those front pinchers. I was wary from this point on while walking in this garden. The temperature (heat and humidity) at this point was becoming unbearable. The sun was shining full blast and the humidity was at least 200 %... yes it's possible. If you haven't been here you can't know! I got a great picture of my mom in the Japanese Garden (she loves these things!) despite the uncomfortable temps! 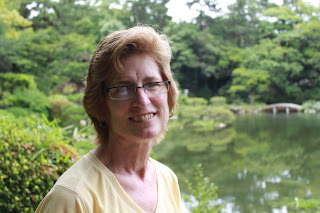 After the garden we started to make our way back in the direction of our hotel (and shopping) but had to stop when we spotted a delicious bakery, with even more delicious air conditioning! We sat there and lowered our body temperatures while enjoying a fabulous little lunch/snack! Fully rejuvenated we were ready to take on whatever Hiroshima had to offer (until that glass door opened and we had to leave that air conditioning of course!)
We did some more shopping, got some crazy make up brushes. Hiroshima is famous for them and apparently professional make up artists from all over order their make up brushes from here. Yep we have them now too. So cool. They really are that good!
Of course it started to rain. Correction, it started to downpour so much that it looked like it was raining from the ground up. It then started to thunder and I was worried about getting electrocuted because I was holding onto a metal umbrella (even though the 324203984 Japanese people around me were doing the same). This is when it became clear that walking under the covered shopping pavilion or visiting a multi-floor shopping mall would be a good idea (see, shopping keeps you safe!). Yesterday we discovered the store Tokyo Hands so today we went back and did some more shopping, that store is great and I highly recommend it to anyone!

Eventually we found a little establishment to have dinner at that had some Japanese food and some tempura items (mom hadn't tried this yet so we wanted to have that option). Bigger bonus was that they had an English menu! What came as an even bigger surprise was one of the items they were serving...I knew it was prevalent here but it still grossed me out when I saw it... 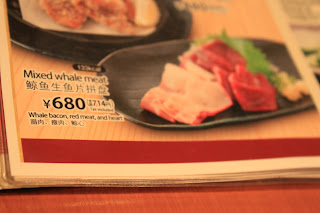 Whale meat. I am definitely on team Whale Wars, not team Japanese Whaling Industry. For the record. On this menu you had two options for your whale meat, fried or raw. The raw platter came with whale bacon, red meat, and heart. I'm gagging as I type this.
We ended the evening with some more sweets. One can never get enough sweets in the day. Mom has become very fond of these little bon bon ice cream things they sell called Pino. They have a hard chocolate shell and vanilla ice cream in the middle. They are divine. For anyone who knows my mom you know she never eats sweets or junk, oh boy has she become a Japanese sweets junkie, I'm so proud of her :)
Tomorrow we head back to Tokyo via Shinkansen. It's a long day of train-ing...and a lot of mileage to cover. I'm not looking forward to leaving this lovely suite in the Crowne Plaza...
Food Hiroshima Japan 2010 Shinkansen Shopping